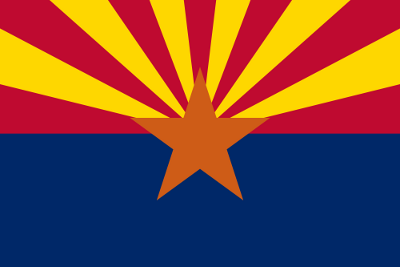 Arizona was the 48th state admitted to the union on the 14th of February 1912. The total land area of Arizona is 113,595 square miles, which offers the state an area rank of 6 out of the available 50 states in the United States. In addition, water surface occupies 396 square miles of the total area of the state within its boundaries. There is a total of 15 counties in Arizona among which the La Paz County was the most recent county formed in the state.

As of 2010, there are 10 State Electoral Votes in Arizona. The State Quarter issue Date of Arizona is June 2, 2008. “Ditat Deus” is the state motto of Arizona.

The nickname of Arizona is The Grand Canyon State and the Copper State. The name of the state bird of Arizona is Cactus wren. The Parkinsonia floridais the state tree of Arizona, and Saguaro is the state flower. Phoenix is the state capital of Arizona. Maricopa County is the biggest of all cities in Arizona by population, and in total land area the Phoenix city ranks first. Tucson is the oldest city in Arizona.

Arizona is renowned for its desert type of weather in its southern part, with extremely hot summers and gentle winters. The northern part of the state includes pine forests, spruce trees and Douglas fir. The Colorado Plateau includes the San Francisco Mountains, including large, profound canyons, with much more reasonable summer temperatures and considerable winter snowfalls. There are ski options in the areas of Alpine, Flagstaff and Tucson. Besides the Grand Canyon National Park, there are numerous national parks, national forests and national tombstones.

Search the Web for More information on Arizona at LookSeek.com Search