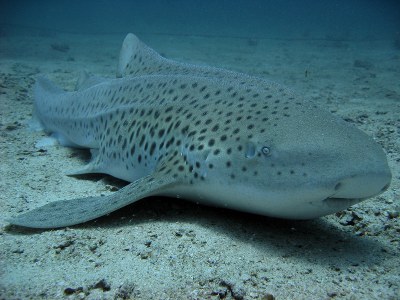 Facts about Zebra Sharks, "Scientific name of Zebra Shark is Stegostoma fasciatum" The Zebra Shark is named for the alternating pattern of gray stripes and black dots on its beige to brown body. The bodies of young zebra sharks are a dark brown with light brown stripes. Both adults and young Zebra Sharks have five distinct rows with spots or stripes. Two more distinguish features of the zebra shark is the impressive tail and the prominent ridges running the length of their body which is almost as long as their whole body. Adult Zebra Shark can grow up to eight feet (2.43 meters) long, and males and females are of similar size. The Zebra Shark has a flattened head and blunt snout and the shark’s eyes are on the sides of its head.

While commonly known as the zebra shark, it is also called the leopard shark, though this name is sometimes used to identify the houndshark.
The Zebra Shark was first described by Seba in 1758. It lives in the tropical waters of the Indo-Pacific, usually living in the coral reef.
The Zebra Shark are long and sleek, capable of wriggling into crevices to hunt for food.
Zebra sharks have barbels or feelers on the sides of their snouts similar to those of catfish. They use these to search for prey while hunting at night. During the day, the Zebra Shark rest on the bottom while standing on their side fins. Unlike sharks that live in the open seas, zebra sharks can pump water over their gills to help them breathe. The Zebra Shark do not have to swim continuously in order to get oxygen. However, they tend to face into the current to minimize this work.
Zebra sharks are mostly solitary but gather several times a year to mate. Zebra sharks lay clutches of several dozen eggs attached to the floor by filaments.
Zebra fish are hunted for food and Chinese medicine. The Zebra Shark are also caught for their fins, with the rest of the shark thrown overboard to rot. Zebra sharks are considered a threatened species, since ocean surveys suggest their numbers are dwindling. However, they pose no threat to humans.

There are over 400 types of sharks, Sharks have the most powerful jaws on on earth. Zebra Sharks jaws, both the upper and lower jaws move. Zebra Sharks skin is made of denticles instead of scales like other fish. The denticles are constructed like hard, sharp teeth (tooth-like projection) and this helps to protect the Zebra Shark from being injury. The Zebra Shark is carnivores meaning: an animal that feeds on flesh (Meat). Zebra sharks feed mainly on reef mollusks and crustaceans as well as crabs, shrimp, snails small fish.

Search the Web for More information on Zebra Shark at LookSeek.com Search