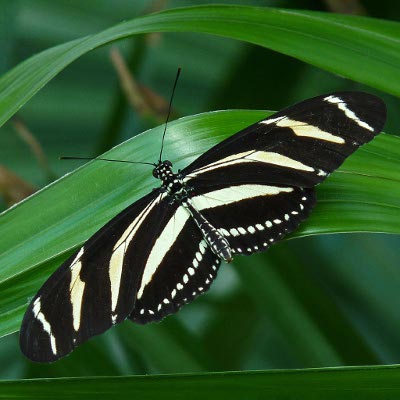 Adults Zebra Longwing Butterfly have long wings with wingspan ranging from 72 to 100 mm. The wings are black with narrow yellow and white stripes on the dorsal side, but paler with a similar pattern with red spots on the ventral side. The caterpillar is white with black spots and has numerous black spikes along its body

Zebra Longwing Butterfly adult is unusual among other species of butterfly in that it eats pollen as well as sips nectar. This ability contributes to its longevity—it can live up to 6 months as an adult. Pollen enables it to synthesize cyanogenic glycosides, which help make its body toxic to potential predators. The behavior of pollen feeding facilitated the evolution of mimicry and aposematism. Zebra Longwing Butterfly that feed on pollen are more brightly colored, show superior mimetic diversity, and are more distasteful to predators.

When caterpillars become fully grown they will attach to an appropriate leaf or small branch, than they will shed the outside layer of their skin and a hard skin underneath known as a "chrysalis" will be their new look
An adult Zebra Longwing Butterfly will come out from the "chrysalis" than it waits a few hours for its wings to dry and fill with blood, before it takes its first flight.

Zebra Longwing Butterfly can see yellow, green, and red. An adult butterfly average life span is from a week to a year
The top flight speed of a butterfly is 12 miles per hour and some moths can fly up to 25 miles per hour.
A Zebra Longwing Butterfly is cold-blooded, which means the body temperature is not regulated on its own. A Butterfly can't fly or eat if their body temperature is below 82 degrees fah (28 cel). Butterfly's are often basking in the sun with their wings open to gain heat and than the veins in the wings carry the heat to the body.
A Butterfly has sense organ, on their feet or tarsi, for tasting
The estimate is between 15000 and 20000 different species of butterfly.

A Zebra Longwing Butterfly has a small body, made up of three parts – the head, abdomen and thorax. A Butterfly has two large eyes, which are made up of many small parts which are called "compound eyes".
A Zebra Longwing Butterfly has two antenna's on the top of their heads, which they use to smell, hear and feel. A butterfly’s mouth is a long tube a "proboscis" - a long narrow tube in their mouth that looks like a straw when its done eating, it rolls the tube back up.

Search the Web for More information on Zebra Longwing Butterfly at LookSeek.com Search