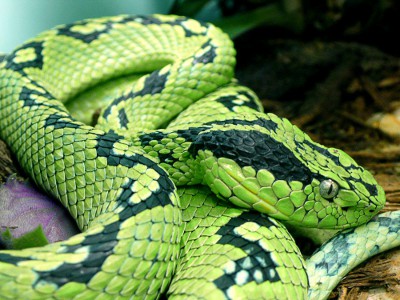 The Yellow-Blotched Palm-Pitviper snake species belongs to a group of snakes which have a pair of heat sensitive pits that are located on both sides of the head between the eyes and the nostrils. The Yellow-Blotched palm-pitviper snake can naturally grow to lengths of less than twenty eight inches (71 cm) although sometimes some species can develop to over three feet, three inches (99 cm) in length. The Yellow-Blotched palm-pitviper snake has a relatively slender body and a prehensile tail. Its body scalation includes eight to twelve supralabials, one to five inter-supraocular scales, nine to thirteen infralabials and eighteen to twenty one rows of dorsal scales which are located in the middle part of the snake.

The coloration of the Yellow-Blotched Palm-Pit Viper includes a pattern of a green color which is coated dorsally with an arrangement of yellow to bordered black blotches. In between the blotches are broken, dorsal strips which are in an irregular pattern. The Yellow-Blotched palm-pitviper snake has a belly which is usually lighter than the dorsum and has a greenish yellow coloration. Its head has a dark colored post ocular stripe with a yellowish-green colored iris which can sometimes have reticulations or black specks with a bronze coloration. However, about ninety percent of all the Yellow-Blotched Palm-Pitviper species has unique dark colored dorsal pattern although a few of the species varieties have a uniform green coloration and without post-ocular stripes. The juvenile palm- pit vipers display pale lime green ground colorations with a bright tail tip.

The Yellow-Blotched Palm-Pitviper is classified as a vulnerable species on the IUCN Red List of Threatened Species. The species has been listed as such due to the fact that the best available evidence indicated its extent of occurrence to be less than twenty thousand kilometer squared (7722 square miles). The population of the Yellow-Blotched palm-pitviper snake was taken from ten or more different locations with an observation of a continuous decline in the projected in the locations. The snake faces a high risk of extinction in the wild.

Although the snake’s species of the genus Bothriechis are venomous, its bites are usually far less fatal to humans beings. In spite of this however, a bite from the yellow-blotched palm-pit-viper has caused at least one fatality in Guatemala.