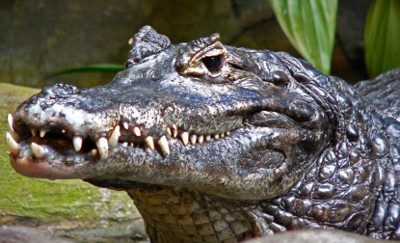 The Yacare Caiman crocodilian is commonly known as the Paraguayan caiman, Piranha caiman, Yacare de Hocico, Red caiman, Angosto, Caimán del Paraguay, Coscarudo, Southern spectacled caiman, Angosto, and Yacare Negro. Approximately ten million Yacare caiman species are extant within the Brazilian Panatal. The population represents the largest single crocodilian population on the continent. The crocodilian species can be found in various habitat types including the wetlands, lakes and rivers. The habitat areas of the species are usually associated with floating mats of vegetation.

The Yacare Caiman crocodilian species is medium to small-sized, having a general body design which resembles the Caiman crocodilus, only reaching maximum lengths of about three meters (10 feet). The adult male varieties develop to approximately six to eight feet (1.8 to 2.4 meters) and rarely ten feet (3 meters) with body weights of about fifty eight kilograms (128 lbs). The female species is smaller than the male species measuring average lengths of about five feet (1.5 meters) and can weigh up to fourteen (30 lbs) to twenty three kilograms (50 lbs). The relatively smaller size of the Yacare Caiman crocodilian species usually makes it a potential prey of the anaconda and the jaguar. Similar to other common caimans, the breed is armored and has scales which have well-developed osteoderms. The breeds less ossified flank is used in the skin trade.

One of the popular names of the species Piranha Caiman, originates from its taste for South American Piranha fish. However, some attributes have been made to support this due to its more crocodile-like dentition in which the teeth in the lower jaw appears to protrude through the parts of the upper jaw although the characteristic is not unusual in other Caiman crocodilian breeds particularly the mature older individuals.

Recent ecological studies carried out in regions of Panatal, Brazil have shown the depleting population number of the species. The removal of the Endangered Species Act in the United States can affect the species to extreme lengths. Illegal hunting and poaching along with habitat destruction of the crocodilian species remains the major threats to the Yacare Caiman crocodilian

The Yacare Caiman crocodilian species feeds on a diet which mostly consists of fish particularly the piranha fish and a variety of birds including the occasional capybara which is widely taken by larger mature adult species. Generally, due to the small size of the Yacare Caiman crocodilian species, it is usually considered to be less fatally dangerous to human beings.

Search the Web for More information on Yacare Caiman Crocodilian at LookSeek.com Search