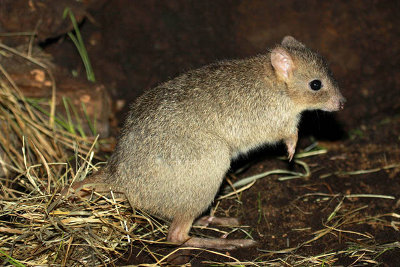 Facts about Woylies. "Scientific name for Woylie is Bettongia penicillata". The Woylie breed is a very uncommon, small marsupial that belongs to the Bettongia family and is a native to Australia. The Woylie is largely found on the mainland of Australia, ranged over all of the most of South Australia, southwest of Eastern Australia, across the central portion of New South Wales and the northwest corner of Victoria.

Appearance of a Woylie

The Woylie breed is a tiny macropod, and appears with the body length between 12 to 13 3/4 inches (30 cm and 35 cm). This breed has a 14 1/2 inches (37 cm) long tail, and the body weight ranging between 2.4 to 3.5 pounds (1.1 kg and 1.6 kg). The color of the fur of the Woylie breed is yellowish-brown with a patch of paler coat on its stomach, whereas the end of its hairy tail is dark in color. The Woylie appears with little hair sometimes, without hair on the tail and the muzzle. This Woylie breed has a slimmer body and bigger ears.

Woylie breeds are strictly nocturnal and are not sociable. They can breed throughout the year if the circumstances are favorable. The female Woylie breeds can breed when they attain the age of six months and give birth once in 3.5 months. The Woylie breed is capable of using its tail, curled about in a prehensile way, to take bundles of nesting fabric. It constructs its nest, which carries the shape of a dome, in a low scrape below a bush. The nest, which is composed of shredded bark and grass, leaves, sticks, and other accessible material, is well-prepared and unseen. The Woylie rests in the nest during the daytime and comes out at night to nourish.

The Woylie breed have a strange diet for an animal. Even though the Woylie feeds on tubers, bulbs, seeds, pests, and resin of the Hakea plant, the size of its nutrients are based on underground fungi, which it excavates by means of its powerful fore claws.

The average lifespan of the Woylie breed ranges from four years to six years in the wild.

Search the Web for More information on Woylie at LookSeek.com Search