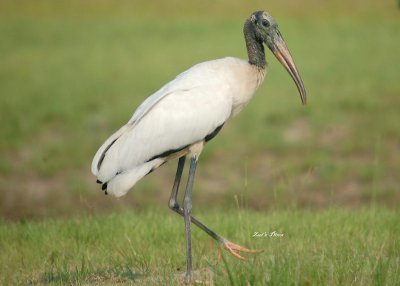 Facts about Wood stork bird. "Scientific name for Wood Stork bird is Mycteria americana". Wood stork birds are a tall bird, white native of brackish or freshwater swamps and wetlands. The Wood stork bird are well known and recognized by those long legs, there are no feathers on their heads, and the prominent bills. There are approximately 17-21 species of stork

In 1984 the Wood Stork bird was placed on the Endangered list on the U.S. Fish and Wildlife Service's, the Wood stork birds almost became extinct. In the 1930s, there was as many as 60,000 wood storks inhabited the United States. But development and less environments and wetland destruction for them to live and breed, made the population go down to about 10,000. The U.S. populations are low and endangered, the South American stork populations are in much better shape.

These waders the Wood stork bird feed on minnows, crayfish, snakes and amphibians, in shallow water by using their bills to perform a difficult but effective fishing technique. The Wood Stork bird search around the shallow water with their mouths open and scoop up whatever is edible. They look for schools of fish to feed on. The Wood Stork will open its bill and than sticks it into the water, then waits for the touch of a helpless fish that wanders too close, when the Wood stork feels a fish it can snap its bill shut in milliseconds an incredibly fast speed reaction time, matched by few other vertebrates. The Wood stork birds often use this technique in small pools created by tides or falling rain water or water banks, where fish congregate in schools

Wood Stork birds can propel themselves in the air as high as 6,000 feet (1830 meters) on their broad wings. Wood storks breed in the southeastern United States such as Georgia and Florida and a few other southern states in the wet lands and they are the only stork to breed in the U.S. Nesting primarily occurred in the Everglades. The Wood Stork also breed in South America from Mexico to Argentina. Wood Storks depend on the summer rainfall in feeding areas to set the conditions for the reproduction of fish. In the dry season in some areas of Florida, breeding begins because this produces the right fishing conditions. It is important that water remains underneath their treetop nests for protection from predators. The Wood Stork bird set up there nests about 40 to 50 feet (12 to 15 meters) off the ground in cypress trees in wetland. An average nesting pair of fledglings, may eat over 400 pounds (181 kilograms) of fish during a single breeding season. Females Wood stork bird lay 2 to 4 eggs, sometimes 5 and both sexes incubate for about one month. Young fledge (feed, care for, and rear young birds for flight) about two months after hatching.

The Wood stork bird falls under the category of bird, they are carnivores and an average life span in the wild of 15 to 25 years. The average size of the Wood Storks body is 33 to 45 in (85 to 115 cm) with a wingspan, 4 feet 9 in to 5 feet 6 inches (1.5 to 1.7 m) and the average weight is 4.5 to 5.6 lbs (2.1 to 2.5 kg). Full grown wood storks stand about three feet (.9 meters) in height, they are bald and have dark bills. The Wood Stork birds are white with a purplish gloss to some of their wing feathers and a purple­-greenish gloss to their small tail. Their long, stick like legs are black and their feet are pink.

Search the Web for More information on Wood Stork Bird at LookSeek.com Search