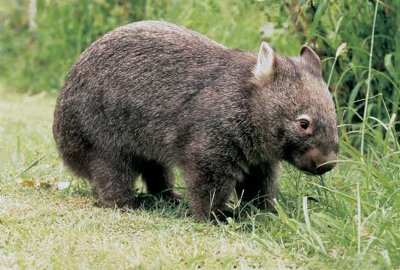 Facts about Wombat. "Scientific name for Wombat is Vombatus ursinus". The Wombat is known to be the largest burrowing mammal. It is also one of the most charming native animals of Australia.

Wombat once habited the whole of southeastern Australia, but has now been restricted further to the south. Currently it can be found in Eastern Victoria eastern New South Wales and Tasmania.

The Wombat is a fairly large animal, with a squat, round, and earlike figure. Wombats ears and eyes are small and with a large naked nose. It has a thick coarse fur with its color varying from brown to grayish or black. On average the Wombat can weigh up to 59.5 pounds (27 kg) and up to 3 feet 2 inches (1 meter) in length, though the Tasmanian Wombat is less bulky weighing up to 44 pounds (20 kg) and 33 1/2 inches (85 cm) in length.

The Wombat has short legs with large paws that have long and strong claws, this feature aide their digging character.

The Wombat’s diet is comprised mainly of plant materials. Though its main food is the native grass, roots, shrubs, herbs, bark, and sedges can also be eaten. At times, when there is food shortage, they will dig up dead grass so as to get to the roots.

The Wombat are mostly nocturnal animals coming out at night when temperatures are cool mostly to graze. In cold seasons they can be seen during the day basking in the sun or grazing.

Wombat use scent-markings to help them to avoid overlap their feeding grounds.

When the Wombat is threatened it will jump into a burrow or a nearby hollow log.

Search the Web for More information on Wombat at LookSeek.com Search