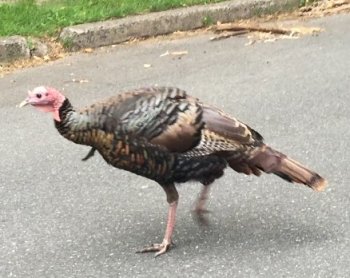 Facts about Turkeys.
The Wild Turkey's range is the United States, Mexico and Canada. (Meleagris gallopavo)
Adult wild turkeys have long reddish-yellow to grayish-green legs and a black body. Males, called toms or gobblers, have a large, featherless, reddish head, red throat, and red wattles on the throat and neck. The head has fleshy growths called caruncles. Only male turkeys display the ruffled feathers, fanlike tail, bare head, and bright beard commonly associated with these birds. When males are excited, a fleshy flap on the bill expands, and this, the wattles and the bare skin of the head and neck all become engorged with blood, almost concealing the eyes and bill. When a male turkey is excited, its head turns blue; when ready to fight, it turns red.
The habitat of the wild turkey is varied, but primarily open woodlands.

The Wild Turkey is a great conservation success stories. Hunted to near extinction in the early years of the 20th Century, restocking and conservation efforts have helped the turkey to reach near abundant status in some locations.

Wild turkeys are omnivorous, foraging on the ground or climbing shrubs and small trees to feed. They prefer eating hard mast such as acorns, nuts, and various trees, including hazel, chestnut, hickory, and pinyon pine as well as various seeds, berries such as juniper and bearberry, roots and insects.

Males are polygamous, mating with as many hens as they can. The breeding season is late February to May with a Clutch Size of 10-12 spotted eggs and an incubation period: 27-28 days.

Females typically responsible for nesting on their own with no help from the tom. Wild Turkeys are polygamous and several hens can be kept with one tom. Chicks can fly quite well at a young age. No special diet requirements, although they are fond of acorns and other native foods if you can provide it. Keeping the individual subspecies pure would be an interesting avicultural challenge.

Search the Web for More information on Wild Turkey at LookSeek.com Search