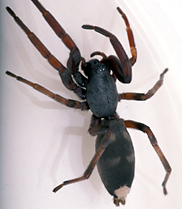 The white tailed spider has a cylindrical body having grey or brown color. They have a white spot at the tail which justifies their name. In some of the spiders two white spots in their head are also marked. They have glossy legs.

Symptoms of a White-tailed spider bite

The White-tailed Spider can bite anywhere on the human body. Mostly bites in legs and arms are seen as legs and arms are the first thing to come in contact with the clothes while wearing them. In the beginning mild itching is felt which turns into severe burn and pain later on. The pain is usually felt around the spot. The area develops reddish appearance which swells and starts turning into a wound with time.

If proper care isn’t taken, of the biting spot of the White-tailed Spider it might develop into skin ulcer and abscess. The person may also feel nausea and vomiting tendency.

People that are already undergoing treatment for any kind of infection, having diabetes, recovering from huge wounds usually face hard time standing against White-tailed spider bite. Localized skin loss is common in such situations. This condition is called “Necrotising arachnidism”. A study says that most of such bites happen indoors. Rare cases are recorded to be fatal.

The White-tailed spider population can be controlled by keeping the home clean. Each corner of the house should be checked for spider webs regularly to prevent them from surviving indoor.

White-tailed Spiders have oversize brains.
In the White-tailed Spider the oxygen is bound to "hemocyanin" a copper-based protein that turns their blood blue, a molecule that contains copper rather than iron. Iron-based hemoglobin in red blood cells turns the blood red

White-tailed Spiders do not have a skeletons. They have a hard outer shell called an exoskeleton-(a rigid external covering for the body in some invertebrate animals). The exoskeleton is hard, so it can’t grow with the spider. The young White-tailed Spiders need to shed their exoskeleton. The White-tailed Spider has to climb out of the old shell through the cephalothorax. Once out, they must spread themselves out before the new exoskeleton will harden. Know they have some room to grow. They stop growing once they fill this shell.

Search the Web for More information on White-tailed Spider at LookSeek.com Search