Back To Category Dolphin
Title : 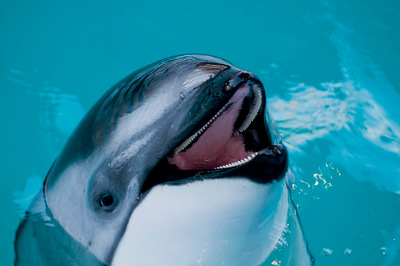 The Pacific White Sided Dolphin has been given the species name Lagenorhynchus obliquidens. The Pacific White Sided Dolphin grow up to two and a half meters or eight feet in length. Their dorsal fins are strongly hooked. The Pacific white sided dolphins are dark or even black on their back and belly but have large gray or white patches on their sides, hence the name.
Pacific white sided dolphins only live in the Pacific, but they range from Asia to North America. They commonly migrated along the American Pacific coast with the seasons, spending winters near southern California and summers near Oregon and Washington. Another large population migrates from Japan to the Kuril islands. The Pacific species is slightly smaller than the Atlantic one, with females growing to be about seven and a half feet (2.28 meters) long while males reach eight feet (2.43 meters).

Both species of white sided dolphins reach maturity between six and twelve years of age and give birth after eleven months. Calves nurse for about a year and a half. In the wild, the White Sided Dolpin live twenty to thirty years.

The White Sided Dolpin eat fish like mackerel, squid and herring. Atlantic white sided dolphins live in groups of thirty to sixty, while the Pacific species has groups with around a hundred individuals.

Search the Web for More information on White Sided Dolpin at LookSeek.com Search