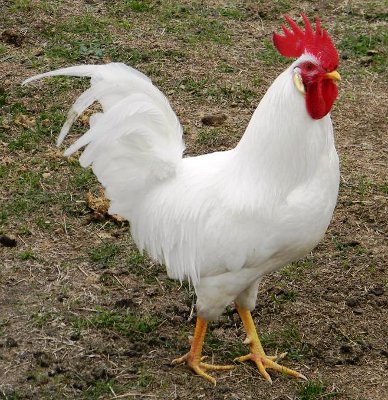 Facts about White leghorn chickens. The White leghorn chicken originated near the Leghorn port in Northern Italy. At one time people used to call them by the name “Livornese” or Italian chicken. They used to be smaller than others chicken breeds, but were capable of laying a remarkable amount of eggs in a year. A person named Captain Gates imported these flocks arriving in the harbor at Mystic, CT, and arrived with the first imports of Leghorn chickens that were to be ancestors of today’s White leghorn chicken in early 1850s. The White White leghorn chicken used to be brown in color and became ancestors of today’s White Leghorn chickens. The white breed began its journey to win America’s heart for its beauty. .
Behavior
The White leghorn chickens are very active birds and will be found most of the time scratching the wet soil and flower beds during most the day. The White leghorn chicken are good hunters for bugs and worms. If you find a dunghill or a flower plant base scratched, the credit goes to the Leghorns. They don’t eat much and are splendid foragers. They can withstand cold climates while still laying eggs. White leghorn chickens are highly fertile and show a prolific existence in groups. When it comes to laying eggs, White leghorn chickens succeed their ancestors i.e. they lay numerous white eggs. In fact, it’s their egg laying capacity makes them more competitive to other chicken breeds and valuable for the amount they lay. The combination of hardiness, potential egg laying capacity and small appetite make the poultry industry heads turn, the White leghorn chicken continued to be their all time favorite.
A majority of White leghorn chickens that are found in today’s market are of industrial type. A majority of total egg production in America comes from this specific breed. However, the non-industrial Leghorns are found in small numbers across the states. The young chicks are very easy to rise and they feather quickly. They are adaptive to almost all soil types. They need to be exposed to an area of wet and muddy soil, just to follow their genetic instincts also scratching. Otherwise, a portion of the poultry shed can be made up of soils for their scratching purpose.
The White leghorn chicken won their heart of farmers by its sprite carriage, long curves and long flowing tail and egg laying.
The White Leghorn Chicken may have single or rose comb. The Roosters weigh around 4 to 6 lbs (1.8 to 2.7 kg) and the females 3 to 5 lbs (1.3 to 2.2 kg). The females can lay 150 – 300 eggs annually. The White leghorn chicken have a good feed-to-egg conversion ratio, needing around 125 grams or .04 ounces per day of feed. They tart laying at 4 1/2 to 5 months, and will continue laying 10 to 12 weeks longer than most good layers. The eggs are white in colored, medium to large.

Search the Web for More information on White Leghorns Chicken at LookSeek.com Search