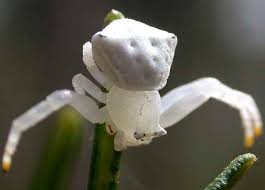 White Flower Spiders are the main hunting territories for them. A white flower spider selects a flower as its territory and waits for its prey on the petals by using its legs as anchor. The spider seizes the prey and bites to paralyse it. When the prey loses its mobility, the White Flower Spider sucks it dry.

White flower spiders are diurnal (that means they roam and hunt during the day) and commonly seen in summer. They are abundantly seen in gardens having native flowers, grass heads and bushes.

All the insects that get attracted to the nectar fall prey to white flower spider. It catches butterflies and other nectar feeding insects with its front legs and bites them to death.

When the white flower female spider is ready to lay eggs, it makes a dish like structure out of the fine thread it secretes from its mouth. It lays eggs on it and makes a silk lid on the disk. The eggs hatch after two weeks and newborns are left for feeding themselves.

The white flower spider is very reflexive. It bites in no time and disappears releasing a venom that causes severe local pain to humans. It usually takes a couple of days to recover fully from the wound and pain.

One species of this spider is known as Goldenrod due to its ability to change its color to yellow to hide in yellow color flowers.

White Flower Spiders have oversize brains.
In the White Flower Spider the oxygen is bound to "hemocyanin" a copper-based protein that turns their blood blue, a molecule that contains copper rather than iron. Iron-based hemoglobin in red blood cells turns the blood red

A White Flower Spiders stomach can only take liquids, so a spider needs to liquefy their food before they eat. They bite on their prey and empty its stomach liquids into the pray which turns it into a soup for them to drink.

Search the Web for More information on White Flower Spider at LookSeek.com Search