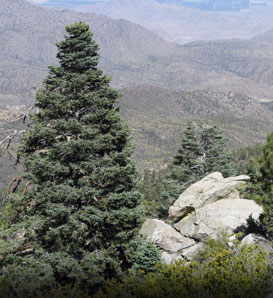 The White fir tree is also known as the concolor fir. The tree is native to the areas of western United States. Under good conditions, it can grow up to a height of about one hundred and thirty to one hundred and fifty feet with a spread of three to four feet. It is considered to live for several years with the eldest being as old as three hundred and fifty years. The tree produces spire-like crowns which have their lower one half to one third being free of branches. Its trunk is usually straight.


The White fir has both its male and female flowers located in the same tree. Its flowers are usually pollinated in spring with its cone maturing within one season. These cones are upright, three to six inches long, barrel-shaped and matures during the early fall paving way to cone seeds. This occurs at an interval of two to four years.


The tree has needle like foliage which are flat, narrow, pointed at the tip, small, occur in rows and without stalks. They grow approximately a half to one and a half inch long. These needles are usually curved and thicker on the upper branches. They occur in bluish-green color during their early stages of growth and turns to a dull-green color as it ages. The tree exhibits a smooth, thin, gray, resin blistered bark while young and a much thicker, irregular flattened scales light gray to reddish-brown bark when it ages.


The White fir tree can do well in moist loamy soils. However, it can also establish in dry, thin soils. It is considered to be tolerant to an average amount of shade. The tree can be found from the coastal ranges in California and Oregon to the rocky mountains of Colorado and New Mexico. The tree is a great ornamental tree which is used in cemeteries. Its wood can be used for pulpwood, furniture, crates and lumber.