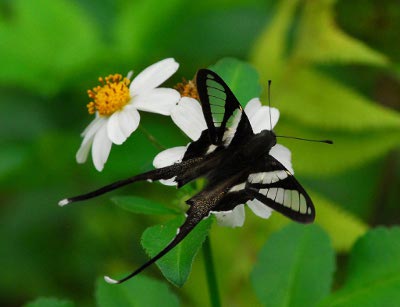 The swallowtail species are made up of a group of butterflies having tails that look like the forked tails of certain swallows. Swallowtails are distributed across the world and are also common in many countries in the southeastern parts of Asia. Usually, the White Dragontail Butterfly can be quite big, with the wingspan of a common Mormon, for instance, being about (10 centimeters). Most of these swallowtails have wings that are mainly black with speckles. Despite the swallowtails being distributed across the whole world, the White Dragontail butterfly is native only to Southeast Asia.

The life-cycle of White Dragontail Butterfly takes roughly six weeks. During the early stages of development, the larva is generally black and smooth, with a black head and the sides above the prologs being yellow-ochre. The larva also has a narrow yellow-ochre border around the anal segment. In later cycles of life, the larva develops an apple green color and is darker on the back. There is a buff line going from head to tail just above the legs, as well as three yellow stripes between the seventh and the tenth segment. The head of the White Dragontail Butterfly adopts a green color with the crown having four round black spots, and two smaller spots at the jaw’s angle.

History of the White Dragontail Butterfly is not well-known. However, its presence in the south and southeastern parts of Asia can be linked to a scientific research in late 1960s in the region. In 1967, a scientist named Dr. Carrey Hughes and his wife visited the National History of Museum’s department of entomology to enquirer if there were any butterflies in Hong Kong that required an investigation into their life histories. They were referred to Lamproptera curius, and they were able to breed it and write notes on its life-cycle. Today, the White Dragontail Butterfly is common in the region with Hong Kong being their most common place.

When caterpillars become fully grown they will attach to an appropriate leaf or small branch, than they will shed the outside layer of their skin and a hard skin underneath known as a "chrysalis" will be their new look
An adult White Dragontail Butterfly will come out from the "chrysalis" than it waits a few hours for its wings to dry and fill with blood, before the White Dragontail Butterfly takes its first flight.

The estimate is between 15000 and 20000 different species of butterfly.

Search the Web for More information on White Dragontail Butterfly at LookSeek.com Search