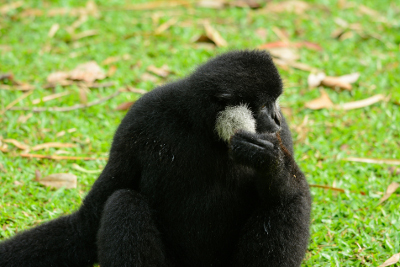 White Cheeked Gibbon Apes have a 28 days menstrual cycle, and after seven months their period of gestation ends. Their birthing pattern is one offspring between two to three years. After birth, mother White Cheeked Gibbon Apes are seen with their infants tightly clinging across their mother's stomach horizontally. With the newborn in this position, it forces the female to sit in a position of having up their knees. Their position will change as they get older to a more vertical position on the stomach. By the age of two, the White Cheeked Gibbon Ape baby's weaning begins and ends soon after. Then after being taken care of; they will leave their familiar family in pursuit of a new family, as soon as they are fully matured.

The White Cheeked Gibbon Ape are usually sociable, approximately six individuals live together. They practice not to travel far in groups, and it is believed they are territorial. During the night you will find them high in the branches sleeping because of their diurnal nature. The White Cheeked Gibbon Ape often tightly embrace one another while they sleep. In comparison to other gibbons, they too have a mated monogamous structure, having one to four offspring. In terms of maturity, they are considered physically independent by age three; at age six they are mature, and tend to leave the family home two years later. However, they might remain with the family two more years later (10 years).

The White Cheeked Gibbon Ape's family is "governed" by the dominant adult female; this is not typical of other ape species. The White Cheeked Gibbon Ape hierarchy has the adult female on top, then the female offspring, then male offspring, and finally the mature (adult). Grooming is another important means of social activity. Grooming takes place between young and adult, sub adults, and adults. The playful behavior of the infants is a social activity that's common.

Search the Web for More information on White Cheeked Gibbon at LookSeek.com Search