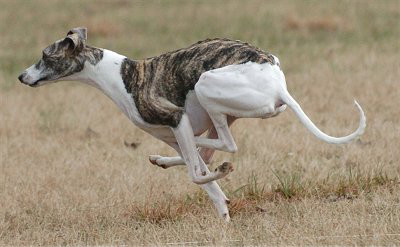 The Whippet Dog empowers great speed and balance. The Whippet Dog, is a miniature English Greyhound, it is the fastest domesticated animal in its weight class, capable of speeds up to 35 m.p.h. The word "Whip it" means (move suddenly or fast in a specified direction). Whippet Dogs can come in a wide variety of colors and patterns.

The Whippet Dog has a long and lean skull with a wide space between the ears. Its nose is black and dark blue or brown in color. The ears are small, folded and held back. The eyes are oval in shape and dark. The feet are thick and the front legs are straight looking more like that of a cat or hare. The Whippet Dogs tail is normally long and held low with a slight curve at the end. The coat is smooth and comes in all colors. These colors are brindle, red, tiger white, fawn or slate blue.

The Whippet Dog are very intelligent, affectionate, sweet and lively. It is also docile and a devoted companion to its owner. It loves quiet and calm places. This is proven by the fact that it loves staying in homes. The Whippet Dog is sensitive, both physically and mentally. For this reason it should not be roughly trained.

Whippet Dogs can be a good watchdog and the good thing is that it is reserved with strangers. When training the dog include variety of activities. The Whippet Dog is good with kids as long as they don’t tease or mishandle it. A perfect dog for traveling due to its cleanliness that does not leave bad odor.

Dealing with other pets that have been raised together with it is easy. But for strange pets like cats, the Whippet Dog can harass them given a chance.

Whippet Dogs sweat glands are between their paw pads.
A Whippet Dog sees in color and have better low light vision. Whippet Dogs have three eyelids, a lower lid, an upper eyelid lid and a third lid, that is called a haw or nictitating membrane, this keeps the Whippet Dogs eye protected and moist. Whippet Dogs eyes have a special membrane for seeing better at night, called a tapetum lucidum - a dogs reflective layer in the choroid chiefly of nocturnal, causing the eyes to glow when light at night hits the eyes and they consist of some layers of smooth flat cells covered by a section of double deformed crystals

Whippets are good to stay in apartments or yards as long as it is exercised. However, it is sensitive to cold and wearing a coat is advisable to keep it warm.

The lifespan of the Whippets are around 12 – 15 years.

A Whippet Dog’s mouth can apply approximately 150 to 200 pounds of pressure per square inch and an American Pit Bull Terrier, German Shepherd Dog and a rottweiler can have 320 LBS of pressure on avg.

All dogs are identical in makeup big or small– 42 permanent teeth and 321 bones. Whippet Puppies have 28 teeth and when they become adult dogs they have 42 teeth. Female Whippet Dogs are in heat for matting for about 20 days twice a year. Whippet Puppies for their first few weeks will sleep ninety percent of the day and their vision is not fully developed until after the first month. Female Whippet Dogs are pregnant for 60 days before they’re puppies are born
The number one heath problems amongst Whippet Dogs is obesity, so always make sure your dog doesn't get to fat. Many foot problems that Whippet Dogs have are just an issue of long toenails. Though it is prone to skin diseases, Anesthesia Sensitivity, Deafness, Eye Diseases, (VWD) Von Willebrand's Disease and stomach upsets.
When purchasing a Whippet Dog from a breeder, make sure to find a good breeder with references, check at least two to three of the puppies that were purchased from this breeder.
The Whippet Dog belongs to the Hound Group and in 1888 it was recognized by the (AKC) American Kennel Club.

Average body temperature for a Whippet Dog is between 101 to 102.5 degrees
A Whippet Dog is an omnivore, (definition-they eat both other animals and plants). All Dogs are direct descendants of wolves.

Only humans and dogs have prostates, But a dog doesn't have an appendix.
Whippet Dog’s nose prints can be used to identify them, their nose prints are like a humans finger print. A Whippet Dog smells more than 1,000 times stronger than that of a human. A Whippet Dog’s nose, secretes a thin layer of mucous that helps it absorb scent, after that they lick their noses and sample the scent through their mouth.

Search the Web for More information on Whippet Dog at LookSeek.com Search