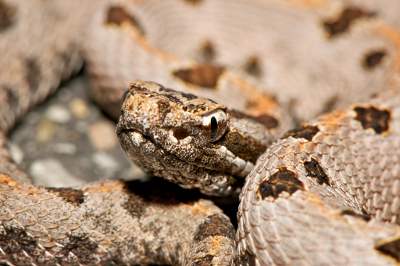 The Western Pygmy Rattlesnake species likes to inhabit the south-facing, partially wooded and rocky hillsides which lie near glades, along the margins of forests, woods near rock ledges and meadows. The Western pygmy rattlesnake often basks on the rocks which are located in the open area, along roadsides near forests brush piles, or glades usually in early summer periods and in late springs. However, the Western pygmy rattlesnake also tends to be nocturnal and can be observed to shelter under rocks in autumn, spring and early summer, retreating into abandoned tiny mammals logs and burrows and crossing roads only during the night. This usually happens in the months of July and August.

The disposition of the Western pygmy rattlesnake is observed to vary from one species to another. Some of the specie’s variety can vigorously defend themselves through sounding their rattles, coiling, jerking the head, and striking upon movement. However, a few of the specie’s variety remains motionless and can try to escape only upon being touched by a snake hook or a stick. Usually the Western pygmy rattlesnake produces a faint buzz can be heard a yard away and often resembles the sound of a grasshopper.

The Western pygmy rattlesnake can feed on a variety of other snake species, lizards, mice and rarely small insects and frogs. Having similar resemblance to other rattlesnakes, the western pygmy rattlesnake possesses hollow fangs which it uses to inject venom into the body of its prey. In addition, it also has heat-sensitive pits between the nostrils and the eyes allowing the snake species to be able to detect and accurately strike its prey including the warm- blooded rodents despite the total darkness conditions.

Search the Web for More information on Western Pygmy Rattlesnake at LookSeek.com Search