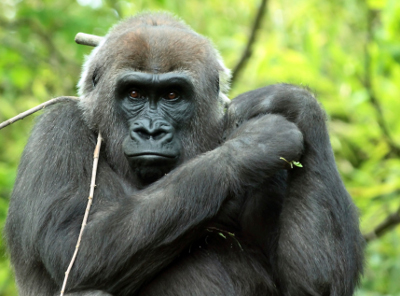 The western lowland gorilla is the smallest of the gorilla subspecies. The adults males are around 400 pounds (180 kilograms). Females are closer to 160 to 220 pounds (72.5 to 100 kg). Western gorillas have brown hair on their heads. Silverbacks, the older males, have silver hair on a defined patch on their backs. They also have a sagittal crest, something females lack.

Western lowland gorillas live in groups from two to fifty. The group is dominated by one silverback male who has two or more females. The family group includes their infants and adolescents. Females Western Lowland Gorilla mature at around seven to eight years of age, while males reach sexual maturity around ten years of age but rarely breed before age fifteen. Females give birth to one baby at a time after an eight to nine month gestation. They nurse the baby for three years, assuming it doesn’t die before then. Females don’t have a breeding season and mate with the silverback once the baby is weaned. Western lowland gorilla females have three to four offspring in a lifetime, giving birth every four or five years. They live thirty or forty years in the wild, up to fifty years in captivity.
Western lowland gorillas tend to have brownish gray coats. Western lowland gorillas are the least endangered population of gorillas, with an estimated 150,000 to 200,000 in the wild and thousands more in zoos and captivity. Some estimates are lower, with Plumptre et al. 2003 estimating the number closer to 110,000. Almost all of the 400 gorillas in the United States are western lowland gorillas.

Western gorillas prefer foods like bamboo and will even dig up the tender shoots. They will eat leaves, stems, shoots, pith and fruit. They will eat herbs if available but have little of it available in their range. While overwhelmingly vegetarian, they will sometimes eat insects like termites for protein. Eastern lowland gorillas, if restoring to insects for food, will go for ants. While upland gorillas may only travel a few hundred feet to find new foraging, the lowland gorilla must travel half a mile a day as a group. The western lowland gorilla has the largest territory, up to five and a half square miles, of any gorilla species due to the lower level of food production in its habitat.

Search the Web for More information on Western Lowland Gorilla at LookSeek.com Search