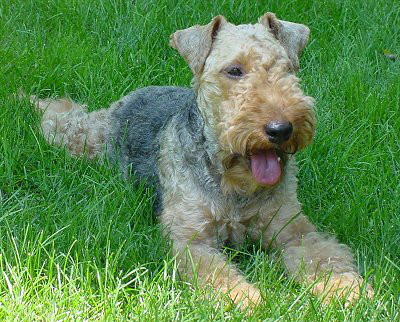 Facts about Welsh Terrier Dogs, "Scientific name for Welsh Terrier Dog, or domestic canine, is Canis lupus familiaris". Welsh Terrier Dog is a welsh breed which was originally bred for hunting purposes. But lately the roles have changed since it is bred for showing. It originates from Wales and it the oldest dog breed in UK.
Welsh Terrier Dogs sweat glands are between their paw pads.
It is a Fact a Welsh Terrier Dog sees in color and have better low light vision. Dogs have three eyelids, a lower lid, an upper eyelid lid and a third lid, that is called a haw or nictitating membrane, this keeps the Welsh Terrier Dogs eye protected and moist. Welsh Terrier Dogs eyes have a special membrane for seeing better at night, called a tapetum lucidum - a dogs reflective layer in the choroid chiefly of nocturnal, causing the eyes to glow when light at night hits the eyes and they consist of some layers of smooth flat cells covered by a section of double deformed crystals.

The Welsh Terrier Dog average weight is around 20 to 22 pounds (9 to 9.9kg). The average height is around 15 inches (39 cm). The head is rectangular and the muzzle is half the length of the head. The Welsh Terrier Dog eyes are small and almond shaped. They are wide, dark brown in color and set widely apart. The teeth meet in a level bite whereas the back is level forming a straight line.

The Welsh Terrier Dog ears are v-shaped. They fold slightly to the side of the head and forward. The front legs are round and straight. They look more of a cat or hare’s legs. In most cases the dewclaws are removed.

At a glance the Welsh Terrier Dog may have a square appearance especially when it raises its docked tail in the air. A thing to note though is that docking is forbidden in European countries.

Welsh Terrier Dogs have two times the amount of ear muscles than people. It is a fact a Welsh Terrier Dog can hear a sound at four times the distance of a human. Sound frequency is measured in Hertz (Hz) Def-Hertz is the measurement of frequency, explicitly it's one cycle per second. The higher the Hertz are, the higher the pitched the sound is. Dogs hear best at 45,000 Hz to 65,000 Hz, while humans hear best at around 20 Hz to 20,000 Hz.

Similar to other members of their family, Welsh Terrier Dog is active, cheerful, intelligent and affectionate. It is playful and devoted to his master. Welsh Terrier Dog withstands rough play and that’s why it is so good with children.

The lifestyle of the Welsh Terrier Dog fits in a very active family. This is because it is courageous and energetic. It follows home rules very well and does what it is expected of it. When it lacks, Welsh Terrier Dogs can become timid and unsure which can lead to stubbornness. But generally it is a good and a loyal dog.

Grooming does not require much for the Welsh Terrier Dog. Plucking of the coat should be done three or more times in a year. Brushing too should be done regularly especially for the show dogs.

A Welsh Terrier Dog’s mouth can apply approximately 150 to 200 pounds of pressure per square inch and an American Pit Bull Terrier, German Shepherd Dog and a rottweiler can have 320 LBS of pressure on avg.

If purchasing a Welsh Terrier Dog from a breeder, make sure to find a good breeder with references check at least two to three of the puppies that were purchased from this breeder.