The Welsh Pony and Cob Horse 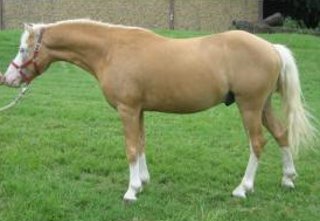 The Welsh Pony and Cob are horse breeds that are closely related this includes both the pony and cob. They did originate in Wales in the UK. The Welsh breeds 4 sections that are primarily defined by height and variations in type. This comprises of; Section A- Welsh Mountain Pony, Section B - Welsh Pony, Section C - Welsh Pony of Cob Type, and Section D - Welsh Cob.

Welsh Pony and Cobs are sure-footed and have sound feet. They have dense bones and are very hardy animals. Ponies have well-laid back shoulder, have a deep chest, a short back, a well-sprung rib cage and a strong hindquarters. They generally exhibit substance, stamina, and the soundness displayed their ancestral bloodstock.

Section A ponies contain small heads with large eyes, short legs, short backs, and sloping shoulders. The Welsh Pony will have a small head, a long neck with long sloping shoulders, with a deep girth, and a muscular back and hind quarters. The Welsh pony in section C is quite similar in appearance to the Mountain pony. It has a quality head with long neck. The section D Welsh Cob is Similar in appearance to Section C Welsh Pony.

Generally they have straight forelegs and short cannon bone. A highly-set tail and the breed range from 44 inches for small ponies to about 64 inches for the tall cobs. The common color coat includes chestnut, grey, black and bay. This breed usually weigh in between 230 – 350 kg varies between the different sections.

The Welsh Pony and Cob have an old and free movement which is characteristically fast, particularly at the trot, with most power coming from its hocks. They are trustworthy, have a friendly character with even temperament, though they are spirited with a remarkable endurance. The Welsh Pony and Cob can live up to 25 – 30 years.

The genetic make-up of Welsh Ponies and Cobs makes them atypically resistant to the diseases. This fact makes it easy to care and handle them.

Welsh Pony and Cob is a suitable mount for both a child and an adult. It is also known as riding pony and driving pony. It’s used in several forms of equestrianism which includes pleasure riding and horse show competition.

The Welsh Pony and Cob crosses well with other breeds. This breed has contributed greatly to the founding of other horse and pony breeds, including the Morgan horse.

Search the Web for More information on The Welsh Pony and Cob Horse at LookSeek.com Search