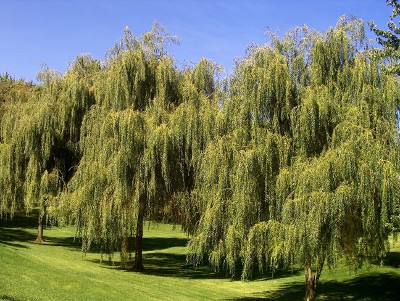 The weeping willow tree has open crown of ground sweeping branches and this gives it a rather rounded weeping shape. It has a simple leaf structure and its leaves are light green above and grayish green beneath. The leaves are flat with smooth edges with alternate elegant leaf arrangement. At maturity, the Weeping Willow Tree can reach a height of between 30 to 40 feet (9.14 to 12.19 meters) with a 35 feet (10.66 meters) spread. It’s a deciduous plant with a mature bark, which often appears as brown and bumpy. Its hardiness zones can range from zone 6 all the way through to zone 8. In the summer, the Weeping Willow Tree has a green foliage color which changes to yellow in October. The weeping willow flowers in spring producing radially symmetrical yellow flowers (male and female flower parts are borne on the same plant) and it blooms from April up to around May. Its fruits are fleshy and long podded.
Weeping Willow Tree leaves are made up of many colored pigments, green chlorophyll hides the colors during the growing season of spring and summer. As days get Shorter and cooler temperatures come in the fall, it cause the chlorophyll to break down and than the other color pigments can be seen.
Weeping Willow Tree growth is referred to as Meristem (The undifferentiated embryonic plant tissue from which new cells are created, as that at the tip of a root or stem). This tissue can be found at the tips of shoots and leaves. Inside the stem growth in thickness occurs at the vascular cambium.

The weeping willow trees can be grown from cuttings in areas with full sun exposure but it can also tolerate partial shade. The Weeping Willow Trees grow well in moist environment with soils ranging from acidic to alkaline. These soils can be either clay, sandy soils or loamy soils enriched with nutrients. A Full grown Weeping Willow Tree can absorb as much as 48 pounds (21.77 kg) of carbon dioxide a year. The same Weeping Willow Tree could also produce enough oxygen in a day for two people. In a single day, a large weeping willow trees can drink up to 100 gallons (378.5 liter) of water from the ground and discharge it into the air.
You can tell a Weeping Willow Tree age by the number of growth rings. Growth rings size shows what kind of conditions accrued that year, the temperature and if it was a dry or wet year.

This plant requires minimal maintenance as it can grow well in vast amount of environments. Check out for diseases such as rust and other fungal and bacterial diseases.

"The fear of trees is Dendrophobia". There are more than 400 species of weeping willow trees
Bark of the Weeping Willow Tree protects it from the elements and is made up of dead cells.
Weeping Willow Tree roots usually grow two to three times the width of the tree branches. The ideal time to fertilize your Weeping Willow Tree is in late fall or early spring. If you want to transplant a tree do it in fall, this is ideal for most trees.
Weeping Willow Trees make their own food from sunlight, carbon dioxide, water, and nutrients from the soil.

Search the Web for More information on Weeping Willow Tree at LookSeek.com Search