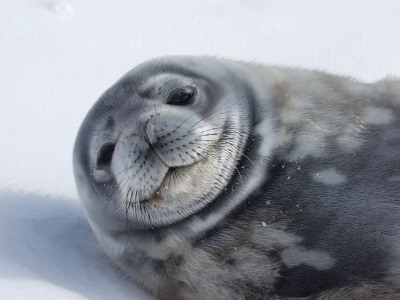 Facts about Weddell Seals. "Scientific name for Weddell Seal is Leptonychotes weddellii". Weddell Seals come from the family of Phocidae. It is one of the well known Antarctic seal species that lives in southern parts. Seals and sea lions and Walruses are semiaquatic mammals they are all in a group called pinnipeds, meaning "fin-footed". Weddell Seals have a spindle shaped body which is dark silver and grayish in color. The under parts are light and mottled, with black and white blotches.

During summer seasons the coat fades to brownish. The Weddell Seals have short and very blunt muzzles which are always pale. They have very light patches over the eyes. The Weddell Seal faces look like that of a cat because of the short mouths. When you look at them you may think they are smiling because they have upturned mouths.

The Weddell seals start to breed when they reach the age of six to eight years. During the mating season they make very loud noise. The Weddell Seal prepare their breeding sites in holes and cracks in the ice. Copulation occurs underwater with the male biting the female on the neck.

The female Weddell Seal gives birth to twin pups unlike other Seals. Giving birth takes one to four minutes and the pups are born with either grey or light brown color. However, they acquire adult coat at around six weeks. The Weddell Seal pups are weaned at around seven weeks where they are left to go hunting on their own.

The Weddell Seal don’t have predators when on ice but in the sea they are preyed by whales and leopard seals. But the Seals that are always in danger are the young ones and the pups.

Search the Web for More information on Weddell Seal at LookSeek.com Search