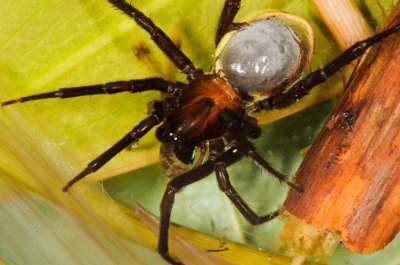 Facts about Water Spider, "Scientific name for Water Spider is Argyroneta aquatica". Water spiders spend their entire life under water. There are many morphological and ecological adaptations which make them unique than other species.

The Water Spider are one of the very few kinds of spiders where males are bigger in size than the females.

The abdomen and legs of the Water Spider are densely covered with hairs. These hairs trap air when the Water Spider is submerged and the air gives a silvery appearance to the Water Spider’s body even though it’s actual color is velvet-grey. This is the reason some people name it as “quick-mercury”.

Water spiders carry air bubbles to retreats among underwater weeds by travelling to the surface and returning to the retreat. When the retreats are filled air they become bell shaped and carry a silvery sheen in daylight. The Water Spiders don’t have to refill the retreats with purified air from the surface as the slivery net works in an amazing way. It diffuses oxygen in from the surrounding water and diffuses out carbon dioxide from inside inspired of being non-living. Scientists haven’t come across such bio-products that diffuse gases selectively with two mediums on either side of it.

Water spiders are horribly solitary. They occupy an exclusive area for themselves and never invade to others. The male Water Spider are more active than the females. They get out mostly at night for hunting while the females stay inside the air sac. Female Water Spider are seen to catch preys that happen to roam too close to the air-bell.

The male Water Spider mate with the females only after building an air-sac adjacent to that of the female. The female Water Spider weaves around the cocoons and attaches it to the top of the air bell. The offspring hatch after few weeks and disperse.

Throughout Britain, northern and central Europe, Siberia and Northern Asia

The Water Spider are found in eutrophic lakes, swamps and slow moving or still water having low pH. Presence of water spiders in a certain water body shows that the place has high dissolved oxygen level. The Water Spider use water plants as anchors for their air-sacs to hold.

In the Water Spider the oxygen is bound to "hemocyanin" a copper-based protein that turns their blood blue, a molecule that contains copper rather than iron. Iron-based hemoglobin in red blood cells turns the blood red

The muscles in a Water Spiders legs pull them inward, but the spider can't extend its legs outward. It will pump a watery liquid into its legs that pushes them out.


A male Water Spider has two appendages called "pedipalps" a sensory organ, instead of a penis, which is filled with sperm and insert by the male into the female spider’s reproductive opening.

Search the Web for More information on Water Spider at LookSeek.com Search