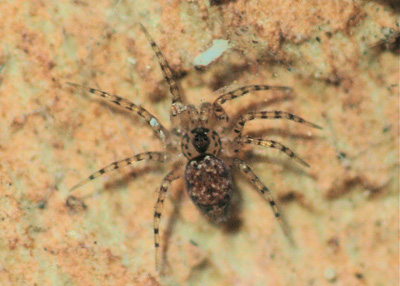 Facts about Wall Spiders, the Wall Spider is one of the most common house spiders in the southwestern United States. They measure full grown 3 mm or less in length. They are to small to bite through human skin.

Wall spiders are usually found in unused, dirty, mushy places. They are often found in houses unused for a certain period. They also live within rocks, in the barks on trees and half rotten leaves on the ground.

Wall spiders live upon organisms that are smaller in size. Ants are their primary prey. Sometimes small insects that keep on roaming on the trees or capable of flying get trapped into the web made by the spiders. The web is made up of fine silk that is almost invisible to the insects.

The Web made by Wall Spiders

The fine thread that the Wall Spiders use to weave their web is called spider silk. It’s a protein fiber that is secreted from a organ called spinnerets. This protein fiber is processed through another organ called cribellum which is a comb like structure to produce fine silk fibers.

These fibers are so thin that insects usually can’t detect them and get themselves trapped. The Wall Spiders also use this fine fiber to form nests, vesicles to protect cocoons and suspend themselves.

The Wall Spiders use the fine silk for ballooning, an action of dispersal from one location to another. However, most of these air-travels make up to a couple of yards.

Wall Spiders do not have a skeletons. They have a hard outer shell called an exoskeleton-(a rigid external covering for the body in some invertebrate animals). The exoskeleton is hard, so it can’t grow with the spider. The young Wall Spiders need to shed their exoskeleton. The spider has to climb out of the old shell through the cephalothorax. Once out, they must spread themselves out before the new exoskeleton will harden. Know they have some room to grow. They stop growing once they fill this shell. Female Spiders are usually bigger than males.
Female Wall Spiders lay eggs on a bed of silk, which she creates right after mating. Once the female Wall Spider lays her eggs, she will than cover them with more silk.

The scientific name of any living organism consists of two parts also a generic name and a species name. Wall spider is the common name for the genus Oecobius. More than fifty kinds of species are found all over the world under the genus Oecobius. The organism is usually as small as a finger tip having mostly eight legs, four legs on both side and the abdomen being flat.

There one species which is different from the rest in its behavior. The Oecobius civitas when enters the territory of another spider of same species; the second one leaves the place to the intruder rather than defend itself.

Wall Spiders have oversize brains.
In the Wall Spider the oxygen is bound to "hemocyanin" a copper-based protein that turns their blood blue, a molecule that contains copper rather than iron. Iron-based hemoglobin in red blood cells turns the blood red

Wall Spiders have two body parts, the front part of the body is called the Cephalothorax-(the thorax and fused head of spiders). Also on this part of the body is the spider’s gland that makes the poison and the stomach, fangs, mouth, legs, eyes and brain. Wall Spiders also have these tiny little leg-type things called (pedipalps) that are next to the fangs. They are used to hold food while the Wall Spider bites it. The next part of the Wall Spiders body is the abdomen and the abdomens back end is where there is the spinnerets and where the silk producing glands are located.

The muscles in a Wall Spiders legs pull them inward, but the Wall Spider can't extend its legs outward. It will pump a watery liquid into its legs that pushes them out. A Wall Spider’s legs and body are covered with lots of hair and these hairs are water-repellent, which trap a thin layer of air around the body so the Wall Spiders body doesn't get wet. It allows them to float, this is how some Wall Spiders can survive under water for hours. A Wall Spider feels its prey with chemo sensitive hairs on its legs and than feels if the prey is edible. The leg hair picks up smells and vibrations from the air. There are at minimum, two small claws that are at the end of the legs. Each Wall Spiders leg has six joints, giving the spider 48 leg joints. The Wall Spider’s body has oil on it, so the spider doesn't stick to it’s own web.

A Wall Spiders stomach can only take liquids, so a Wall Spider needs to liquefy their food before they eat. They bite on their prey and empty its stomach liquids into the pray which turns it into a soup for them to drink.

A male Wall Spider has two appendages called "pedipalps" a sensory organ, instead of a penis, which is filled with sperm and insert by the male into the female Wall Spider’s reproductive opening.

Search the Web for More information on Wall Spider at LookSeek.com Search