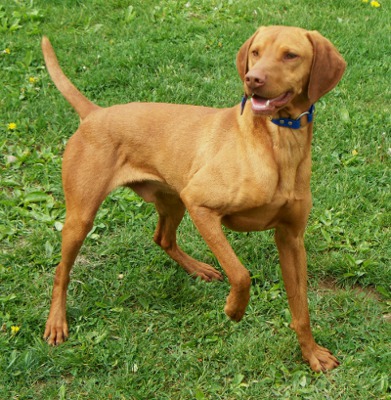 Facts about Vizsla Dogs, "Scientific name for Vizsla Dog, or domestic canine, is Canis lupus familiaris". The Vizsla Dog is a dog breed which belongs under the FCI group 7(pointer group) and it originates from Hungary. The Vizslas ancestors were hunters from the Magyar hordes, a people from what we call the country of Hungary. The Vizslas are depicted in wall paintings back as far as the 10th century. This is were the name is said to comes from Vizsla Dog. Being the smallest among all-round pointer-retriever breeds, the Vizsla Dog is a sporting dog and a very loyal companion.

The Vizsla Dog has a well protective instinct despite being gently, affectionate and sensitive. One can think it is a dog that cannot sense when there is danger but this false it is fearless. Naturally the Vizsla Dog can be used for hunting since it can be easily trained.

When training the Vizsla Dog it is advisable not to do it harshly. This is due to their sensitivity. Though one is requested to be a bit tough or the dog may turn the clock and start training you instead. The Vizsla Dog is one dog that likes the company of the owner. It is very comfortable around children and in most cases it likes even sleeping with the owner.

All dogs are identical in makeup big or small– 42 permanent teeth and 321 bones. Vizsla Puppies have 28 teeth and when they become adult Vizsla Dogs they have 42 teeth.
Female Vizsla Dogs are in heat for matting for about 20 days twice a year. When Vizsla puppies are born, they have no teeth and are deaf and blind. Vizsla Puppies for their first few weeks will sleep ninety percent of the day and their vision is not fully developed until after the first month.
Female Vizsla Dogs are pregnant for 60 days before they’re puppies are born.

The Vizsla Dog coat is either solid golden rust, solid rust, copper or brown, russet gold or dark sandy gold. This is due to breeding programs but in some instances there are others that are dark mahogany red and pale yellow though these are considered to be faults.

Vizsla Dogs have two times the amount of ear muscles than people. It is a fact a Vizsla Dog can hear a sound at four times the distance of a human. Sound frequency is measured in Hertz (Hz) Def-Hertz is the measurement of frequency, explicitly it's one cycle per second. The higher the Hertz are, the higher the pitched the sound is. Vizsla Dogs hear best at 45,000 Hz to 65,000 Hz, while humans hear best at around 20 Hz to 20,000 Hz.

The average lifespan of Vizsla Dog is around 9-15 years according to club of America survey. However, due to breeding programs some heritable illnesses have been recorded. The number one heath problems amongst Vizsla Dogs is obesity, so always make sure your Vizsla Dog doesn't get to fat. Many foot problems that Vizsla Dogs have are just an issue of long toenails. The most common ones are Hypothyroidism, (PRA) Progressive Retinal Atrophy, canine epilepsy, Lymphosarcoma, cancer and sebaceous adenitis. Hip dysplasia is not very common in this breed.

Vizsla Dogs sweat glands are between their paw pads.
It is a Fact a Vizsla Dog sees in color and have better low light vision. Vizsla Dogs have three eyelids, a lower lid, an upper eyelid lid and a third lid, that is called a haw or nictitating membrane, this keeps the Vizsla Dogs eye protected and moist. Vizsla Dogs eyes have a special membrane for seeing better at night, called a tapetum lucidum - a dogs reflective layer in the choroid chiefly of nocturnal, causing the eyes to glow when light at night hits the eyes and they consist of some layers of smooth flat cells covered by a section of double deformed crystals.

The Vizsla Dog does not have an undercoat. This is why in most cases it is kept indoors in order to keep it healthy and happy. It is not fitted for outdoor purposes.
Vizsla Dog’s nose prints can be used to identify them, their nose prints are like a humans finger print. It is a Fact a Vizsla Dog smells more than 1,000 times stronger than that of a human. A Vizsla Dog’s nose, secretes a thin layer of mucous that helps it absorb scent, after that they lick their noses and sample the scent through their mouth.
If purchasing a Vizsla Dog from a breeder, make sure to find a good breeder with references check at least two to three of the puppies that were purchased from this breeder.
The Vizsla Dog belongs to the Sporting Group and in 1960 it was recognized (AKC) American Kennel Club.

Average body temperature for a Vizsla Dog is between 101 to 102.5 degrees
A Vizsla Dog is an omnivore, (definition-they eat both other animals and plants). All Dogs are direct descendants of wolves.

A Vizsla Dog’s mouth can apply approximately 150 to 200 pounds of pressure per square inch and an American Pit Bull Terrier, German Shepherd Dog and a rottweiler can have 320 LBS of pressure on avg.

Search the Web for More information on Vizsla Dog at LookSeek.com Search