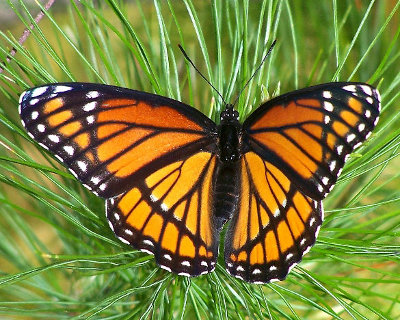 Viceroy butterflies live in marshes, meadows, and swamps and other wet areas with poplar and willow trees.

The Viceroy Butterfly mate in the afternoons. The females lay their eggs on the leaves of tips of willows and poplars. There are usually 2 to 3 generations of viceroys born each season of breeding.

The caterpillars feed on leaves of the willow family Salicaceae. The Viceroy Butterfly include willows, cottonwoods, and poplars. The caterpillar sequesters salicylic acid in its body, which makes it bitter, and upsets predator’s stomach. As further protection, this caterpillar, as well as its chrysalis stage, resembles bird droppings.

Adult Viceroy Butterfly are diurnal, flying in the late mornings and early afternoons.

Like many other species of butterfly, the main predators of Viceroy Butterfly are birds.

Some studies indicate that selective pressures from the Viceroy Butterfly predators may have given rise to the Viceroy’s “model-switching”, with each subspecies of L.archippus choosing to copy the locally dominant Danaine subspecies’ color pattern. When the breeding range of Monarchs’ overlaps with that of Viceroy Butterfly, the Viceroys will adopt light orange phenotypes. Towards the south, the Viceroys mostly displayed darker phenotypes in response to the large population of the queens. The only difference between the two butterflies is the color of their wings; other features, including wing-pattern elements and body size, are identical.
Viceroy Butterfly are insects. A Viceroy Butterfly is a herbivore; Meaning that as a caterpillar its first food is its own eggshell and than it will eat the leaves of the plant on which it is hatched. When it becomes a Viceroy Butterfly, it will feed mostly on nectar from flowers, rotting fruit and water with a "proboscis" - a long narrow tube in their mouth that looks like a straw.

When caterpillars become fully grown they will attach to an appropriate leaf or small branch, than they will shed the outside layer of their skin and a hard skin underneath known as a "chrysalis" will be their new look
An adult Viceroy Butterfly will come out from the "chrysalis" than it waits a few hours for its wings to dry and fill with blood, before it takes its first flight.

Search the Web for More information on Viceroy Butterfly at LookSeek.com Search