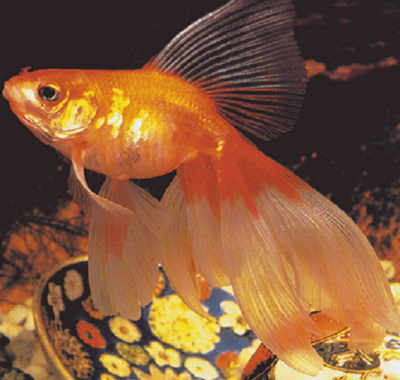 Veiltail Goldfish is very popular among goldfish breeders and goldfish lovers. Veiltail goldfish were breed in the United States in the 1890s. Veiltail are the result of breeding the Telescope eye goldfish with a Japanese Ryukin goldfish. In the beginning of the breed they called the new goldfish, the Philadelphia Veiltails.
The Veiail goldfish Diet: Omnivore. Veitails can grow up to 10 inches in length they average about 5 to 7 inches and they can live up to 20 years, but usually between 7 and 10 years. The environment they live in is Freshwater. Invest in a good tank and size it right, depending on the amount of goldfish you will be housing. Make sure there is plenty of space. A Veiltail goldfish needs at least a 10 to 20 gallon tank, 20 is recommended as the smallest. Veiltail goldfish can grow very fast if they are taking good care of, so choosing a tank that can accommodate their full grown size will save you the headache of upgrading to a larger tank later.
You need the proper filter. Goldfish create a lot of waste and are known for being messy. your filter should completely clean the water at least ten times an hour. If you have a twenty gallon tank, you will need a filter that can handle the waste of at least 200 gallons per hour. A filter that cleans more than ten times the amount of water in the tank is more than adequate.
Prepare the tank. Read up on the nitrogen cycle in aquariums. You will need to purchase a liquid test so that you can test for Nitrates and Ammonia. Strip-style test kits are unreliable and a waste of money. Use a dechlorinating product to remove the harmful chlorine from the water. Get coffee bean sized gravel for the bottom of the tank (if it is any smaller the goldfish could accidentally swallow some while feeding). Make sure any rocks or gravel are metal-free, since rocks with metals can harm fish by leaching toxic residues into the surrounding water.
To decorate your tank, Buy a few ornaments and decorations and fake plants. Do not buy ornaments with openings small enough that the fish can get stuck in them. Remember to consider how large your goldfish can get. When choosing decorations you should add plants; goldfish will nibble on some live plants, usually tough plants such as hornwort, vals, anubias, and there are others that are fine.
Cycling your tank is important, Follow the steps to cycle your tank. This establishes healthy bacterial and chemical levels.
When buying your Veiltail goldfish see which ones look like the healthier ones. Be wary of tanks with dead fish in them, as this can be a sign of illness or improper care. In addition, healthy fish will have no white spots, swim with their fins held upright, Have a nice rich color or colors. Not be afraid of people, Swim around all over the tank and look healthy. Clamped fins are a sign of illness
Add the Veiltail goldfish to the tank. It is important to introduce the fish to the tank environment slowly. As soon as you get home, float the entire, closed pet store bag (with the Veiltail goldfish inside!) in the tank for about half hour. This will allow the water in the plastic bag and the fish is in to equal out to the same temperature as your tank. Next, add a small amount of water from your tank to the bag, and wait about 15 minutes. Do this at least one more time. Dispose of the water down a drain or outside. Then, use a net to transfer the Veiltail goldfish fish carefully into the your tank. Dispose of all of the water in the bag. This process not only reduces stress for you fish, it also prevents the dirty pet store water from contaminating your tank.
Feed the Veiltail goldfish three times a day in small prtions, gold fish do not have stomachs, that's why small portions more times a day. Feed a good quality goldfish food, pellets or flakes. Veiltails may also eat frozen foods such as brine shrimp, bloodworms, and krill. Also, you can feed them vegetables like peas, leafy greens like collards and kale. Cut or tear them up into small pieces for the fish. Be careful not to overfeed Veiltail goldfish flakes. Temperature that is prefer is water in the range of 65 - 78F. Test for nitrite, ammonia, and proper PH. The ammonia should always be 0, the nitrite should be 0, and the nitrate should be below 20. If it's at or above 40, you have too many fish or are not changing the water in your tank often enough! If there is ammonia or nitrite, your tank is still cycling and you need to do your research about the cycling process.
Doing weekly water changes, once a week, remove and replace 30%-50% of the water for your Veiltail goldfish tank. Removing all the water from the tank will damage the bacteria that has grown that helps decompose the fish waste. Make sure to dechlorinate the new water before adding it to the tank.
Perform a thorough gravel cleaning once every 2 weeks or so. you need to use a gravel vac which vacs up debris while removing water and cycling it back to your tank. With tropical aquariums, it is often recommended that you do this once a month, but with goldfish (who produce an absurd amount of waste) you will need to do this as frequently as you can. Once a week, once every two weeks, or once every three weeks is the minimum.

Search the Web for More information on Veiltail Goldfish Raising and Care at LookSeek.com Search