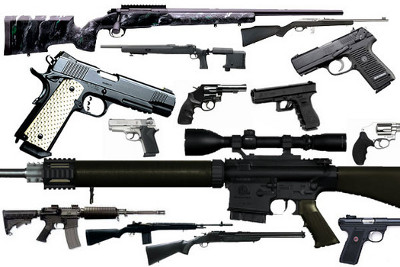 Some facts about Guns, There are various types of firearms, categorized by their configuration and functionality. Below I will list several types of fire arms and give a short description of each.

Pistol – this is a hand-operated small firearm that has chamber integral or aligned with the bore.

Revolver – A hand-operated firearm that has a revolving cylinder that contains chambers for separate cartridges.

Shotgun – A firearm with a smooth-bore shoulder and it is capable of discharging at least two projectiles down barrel with just a single release of the trigger.

Carbine – is a short rifle which contains a barrel under 16 inches long. It is commonly used by engineers, artillery, cavalry, or any one that requires a weapon for emergencies or self-defense. It has an inferior accuracy and ballistics compared to the full version of the firearm it is adapted from.

Assault Rifle – this type of firearms are capable of releasing a single shot or even automatic fire while using a short riffle cartridge. It provides accurate fire with a more controllable recoil force compared to a standard riffle cartridge. They are preferred as army weapons as the cartridge case is somehow reduced in size thus weighing less which enables the soldiers to carry more. Another advantage is that it can fire up to 800 rounds per minutes.

Machine Gun – this is a firearm that was designed to fire more than a short per release of the trigger. Three round burst mode is considered fully automatic, since there is more than one shot that is fired with just a single trigger pull.

Machine Pistol – this is a pistol cable of firing more than a shot per pull of the trigger. They might come with a stock to increase control, though they can be handheld.

These are just but a few types of firearms commonly used, though there are a few others that aren’t mentioned in this articles like the light, medium, and the Heavy Machine Guns.

Search the Web for More information on Types of Firearms Guns at LookSeek.com Search