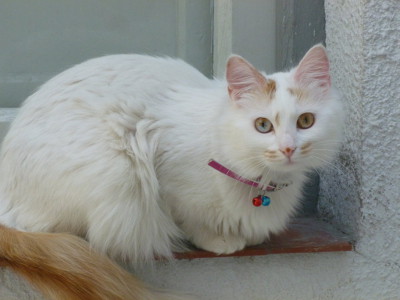 The Turkish Van Cats are colored cats which have huge white patches on their semi-long single coated fur. These coloring are caused by a white spotting gene known as "piebald" (displaying irregular patches of two colors, typically white and black). The Turkish Van Cat can also have random colors on their head, body, tail and legs. The coloring in these types of breeds is known as the Van pattern and the colors can either be, black, cream, brown, blue, red, or tabby in red with their nose leather and paw pads being pink in color and sometimes with color spots.

There are over 500 million domestic cats in the world and 88 million in the United States Approximately 40,000 people are bitten by cats in the U.S. annually. Turkish Van Cats help control rodents like small rats and mice where the live homes, warehouse, ect. A female cat is called a "queen or molly", male cat is called a "tom" and the name "clowder" is called a group and young or baby cats are called kittens. Turkish Van Cats have very sharp hearing and their sense of smell is fantastic. Turkish Van Cats average life span is around 12 to 15 years. The reason why Turkish Van Cats can squeeze through very small spaces is that they have no collarbone and free-floating clavicle bones that their shoulders are attach to their forelimbs, that's why a Turkish Van Cat can fit through a hole the same size as its head and they use their whiskers to determine if they can fit through the space.
Turkish Van Cats can see at levels of light six time lower than a human, this is why cats can catch mice so easily at night. Turkish Van Cats outer ear uses 32 muscles to control it, and a human has only 6 muscles in its ear and a cat can move its ears 180 degrees. A Turkish Van Cat can move their ears independently. The cat's hairball is called a "bezoar" (meaning a concretion or calculus found in the intestines or stomach of certain animals, in particular ruminants, formerly alleged to be an effective cure for poison). A Turkish Van Cats has 30 teeth while a kittens has about 26 teeth that they will lose at about 6 months of age. A Turkish Van Cat has the ability to jump up to six times its length.

Search the Web for More information on Turkish Van Cat at LookSeek.com Search