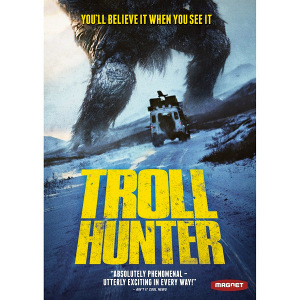 I had been jonesing to see this cool little Norwegian movie called THE TROLL HUNTER (Trolljegeren), after I heard about it last year. This unique and original fantasy horror film brings to us the idea that what if trolls really existed, but are being kept secret.

This is the story or 3 student filmmakers making a documentary about a series of mysterious bear killings and meet Hans, a supposed unlicensed bear poacher. Hans admits to them that he hunts trolls that have broken out of their territories, for the TSS (Troll Security Service). He allows them to film and follow him because, well, he’s sort of a disgruntled employee.

Ok, this is not a perfect film, I did thoroughly enjoy it. While even being a low budget movie it is pretty epic and the CGI is quite impressive. The story does have some interesting twists, and very interesting explanations for for mundane things we see everyday. You have to see the movie to understand what I'm talking about.

First off this is a mockumentary, shot in the hand-held camera style, but it doesn’t over use this style. The shots are steady with smooth sweeping shots, that allow you to really see the trolls and the locations. Everyone complains about the hand held style, but this does not bother me as much as long as the story is interesting, which it was. All of the actors in the film are great, and natural, the locations are beautiful, and the trolls look pretty damn cool. The trolls I must say while looking kind of campy sometimes, but still look awesome, and no species ever look they same. Hans at one point goes in length to discuss the variety of trolls and their sub species.

The humor is also very funny and dry. There is a whole gag about whether or not anyone of the students is Christian, because trolls can smell Christian blood. And another one where Hans has to get a troll that lives under a bridge, so he brings out 3 goats onto the bridge to lure it out, you know like the fairy tale "Billy Goats Gruff". That particular scene is my favorite in the movie.

So I recommend this movie, but it might not be everyones cup of tea. You should see before Hollywood remakes it, yep you heard me right, Chris Columbus’s production company, 1492, acquired the rights to this movie. Which proves my point that Hollywood has run out of original ideas.

Search the Web for More information on Trollhunter (2010) Movie Review at LookSeek.com Search