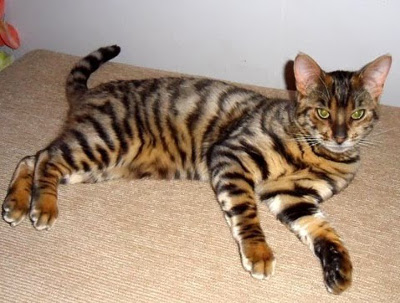 Facts about Toyger Cat, "Scientific name for Toyger Cat is Felis Catus". The name 'Toyger' is believed to come from two words Toy and Tiger. The "Toyger Cat" are considered to have been founded by Judy Sugden who was native to USA. The Toyger Cats were a crossbreed of the Standard Bengal Tabby and the stripped Domestic Short Hair. The cross between the two breeds resulted to a stripped cat which resembles a 'small tiger.'

The Toyger Cat is, however, considered to be a designer breed which is currently still being bred. Breeders, over the coming years, are still striving to give these spectacular cats the true look of the wild tiger. Many of the looks that have been proposed by the breeders have never been seen in domestic cats. The breeders believed to turn the Toyger Cat in to a real tiger with only a few more years of breeding.

Some of the characteristics of the Toyger Cat include; smaller eyes, shorter ears, wider nose tips and bigger chins. The medium sized Toyger Cats, which have branching stripes of orange to brown to black color resembling that of a tiger, have been developed by crossbreeding the Bengal cats with stripped domestic short-hair cats.

The Toyger Cats are considered to be medium in size with a robust and strong torso. Their coats are thick, short, soft, have a luxurious feeling and are plush. Their tails are carried low, set, muscular, and long. The Toyger Cats, short thick coats have a tan background to an orange color with dark stripes which resemble those of a tiger. Their stripes are long rosettes and are evenly spaced out at random and with no spots. The Toyger Cats round shaped ears have good bone structures with an overall balance.

There are over 500 million domestic cats in the world and 88 million in the United States Approximately 40,000 people are bitten by cats in the U.S. annually. Toyger Cats on average sleep 13 to 14 hours a day and when they are awake, the spend a lot of time liking themselves to keep themselves clean. Toyger Cats help control rodents like small rats and mice where the live homes, warehouse, ect. A female Toyger Cat is called a "queen or molly", male Toyger Cat is called a "tom" and the name "clowder" is called a group and young or baby cats are called kittens. Toyger Cats have very sharp hearing and their sense of smell is fantastic. Toyger Cats average life span is around 12 to 15 years.

Toyger Cats can see at levels of light six time lower than a human, this is why cats can catch mice so easily at night. Toyger Cats outer ear uses 32 muscles to control it, and a human has only 6 muscles in its ear and a cat can move its ears 180 degrees. A Toyger Cat can move their ears independently. The cat's hairball is called a "bezoar" (meaning a concretion or calculus found in the intestines or stomach of certain animals, in particular ruminants, formerly alleged to be an effective cure for poison). A Toyger Cat can climb up a tree well but can not climb head first down a tree, because all the claws on a cat’s paw points the same direction, to get down from a tree, a Toyger Cat has to back down. A Toyger Cat can run at a top speed of about 30 mph (48.2 km) over a short distance. A Toyger Cat rubs against a person to not only to be affectionate but also to mark out its territory. The Toyger Cats heart beats at 110 to 140 a minute, That is almost twice as fast as a human heart.

A Toyger Cats has 30 teeth while a kittens has about 26 teeth that they will lose at about 6 months of age. A Toyger Cat has the ability to jump up to six times its length.
A Toyger Cat averages about 12 whiskers on both side of its face. A Toyger Cats jaw can not move sideways, there for a cat can not chew large pieces of food. A Toyger Cats back is highly flexible because of its 53 loosely fitting vertebrae. The body of a Toyger Cat has 230 bones. While a human body has 206. Compared to a humans who only have 34. The average Toyger Cat temperature of a cat is 101.5 °F. The fear of cats "Ailurophobia".

Search the Web for More information on Toyger Cat at LookSeek.com Search