Back To Category Plumbing Repair
Title : 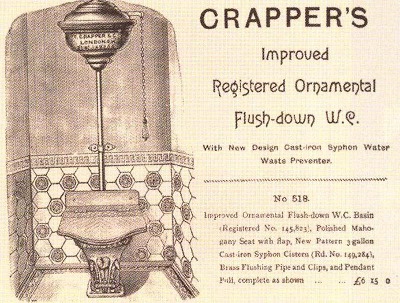 Thomas Crapper born September 28 1836. Died January 27 1910. A plumber who founded Thomas Crapper & Co in London. It was widely speculated that Thomas Crapper invented the toilet. The rumor of the crapper started in WWII, US soldiers stationed in England. The toilets in England at the time a big portion were made by Thomas Crapper & Co Ltd. With the company's name appearing all over the toilet the soldiers started calling toilets the crapper.
Crapper did not invent the flush toilet. He invented the ball cock ( flush valve), his improvements in the toilet development earned him several royal warrants. The toilet was invented by John Harrington in 1596 although, it wasn't until 1778 that the first practical toilet was invented in England, by Joseph Bramah.
Manhole covers with crapper's company's name on them in Westminster Abbey are now one of London's minor tourist attractions.
The word (crap) was known in England way before Thomas Crapper was born. It was used in the 16 century to refer to rubbish or chaff.

Search the Web for More information on Toilet Crapper at LookSeek.com Search