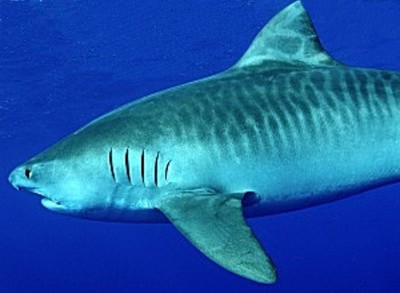 Facts about Tiger Shark, "Scientific name for Tiger Shark is Galeocerdo cuvier". Tiger sharks are a species of requiem shark. Tiger sharks are the only member of the Galeocerdo genus. Tiger sharks are named for the vertical stripes along their bodies. The markings are more pronounced in juvenile sharks and fade with maturity. Aside from the markings, the tops of their bodies are sea green to dark gray above and yellow white to bright white on their bottom. This coloring pattern means that they resemble sunlight on water when viewed from below and sea bottom when viewed from above. Tiger sharks have a broad head that becomes narrower toward the tail.
The Tiger Shark are one of the largest shark species, with adults regularly reaching eighteen feet (5.48 meters) in length. The Tiger Shark are one of the more prolific species, having thirty to sixty pups at once. These births usually occur in the spring or early summer. Tiger shark pups are one and a half to three feet (.45 to 1.52 meters) in length.
The tiger shark is one of the top three sharks implicated in attacks on humans. They are the primary attack shark in shark attacks in Hawaii. However, the Tiger Sharks are found off the Atlantic from Massachusetts to the Caribbean Sea. Tiger sharks are also found in the Pacific, from California south. Tiger Sharks seem to prefer murky waters, such as river estuaries and harbors.
The Tiger Shark are found around major Pacific island chains like the Hawaiian islands, Solomon Islands and Marshall Islands. Tiger sharks tend to live in coastal waters and the continental shelf and frequent coral reefs. They live in both the northern and southern hemisphere.
The tiger shark eats almost anything. They eat bony fish, rays, turtles, marine mammals like dolphins, smaller sharks and even human garbage. The Tiger Shark broad diet is partially responsible for their occasional attacks on humans. These attacks are rare, though, since tiger sharks tend to spend the day in deep waters but moving toward shore at night. Tiger sharks tend to live solitary lives.

The IUCN considers tiger sharks to be near threatened. They are hunted for their fins and often die in fishing lines.
There are over 400 types of sharks, Sharks have the most powerful jaws on on earth. Tiger Sharks jaws, both the upper and lower jaws move. Tiger Sharks skin is made of denticles instead of scales like other fish. The denticles are constructed like hard, sharp teeth (tooth-like projection) and this helps to protect the Tiger Shark from being injury. The Tiger Shark is carnivores meaning: an animal that feeds on flesh (Meat).

Search the Web for More information on Tiger Shark at LookSeek.com Search