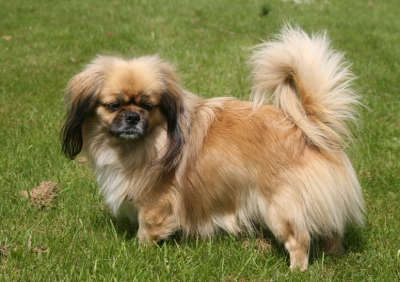 The average height if the Tibetan Spaniel Dog 10 inches (25.4 cm) and the average weight is 9 to 15 pounds (4 yo 6.8 kg) It has a slightly longer face with less or no extra skin around the eyes. Its body is not in proportion to height, it is usually longer. Tibetan Spaniel Dogs dome-shaped head is smaller as compared to the body with a medium-sized muzzle which has a slight defined stop and no wrinkles. The color of the nose is black and the eyes, dark brown.
Tibetan Spaniel Dogs have two times the amount of ear muscles than people. Facts a Dogs can hear a sound at four times the distance of a human. Sound frequency is measured in Hertz (Hz) Def-Hertz is the measurement of frequency, explicitly it's one cycle per second. The higher the Hertz are, the higher the pitched the sound is. Tibetan Spaniel Dogs hear best at 45,000 Hz to 65,000 Hz, while humans hear best at around 20 Hz to 20,000 Hz.

The Tibetan Spaniel Dog can be prone to respiratory problems and heatstroke, (PRA) Progressive Retinal Atrophy (PRA)and Patellar Luxation. It can live for many years, approximately twelve to fifteen years.

If purchasing a Tibetan Spaniel Dog from a breeder, make sure to find a good breeder with references check at least two to three of the puppies that were purchased from this breeder.
The Tibetan Spaniel Dog belongs to the Non-Sporting Group and in 1983 it was recognized by the (AKC) American Kennel Club.

A Tibetan Spaniel Dog’s mouth can apply approximately 150 to 200 pounds of pressure per square inch and an American Pit Bull Terrier, German Shepherd Dog and a rottweiler can have 320 LBS of pressure on avg.

Search the Web for More information on Tibetan Spaniel Dog at LookSeek.com Search