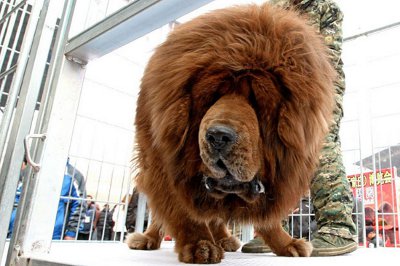 A Tibetan Mastiff Dog’s mouth can apply approximately 150 to 200 pounds of pressure per square inch and an American Pit Bull Terrier, German Shepherd Dog and a rottweiler can have 320 LBS of pressure on avg.

Tibetan Mastiff Dogs weight comes with a sturdy, slightly longer body with broad wrinkles on the head which can be strong and heavy. Its nose is large and black in color with a muzzle which appears to be square-shaped from the sides. Tibetan Mastiff Dogs ears are pendant, v-shaped and hang forward closing the head. The Tibetan Mastiff dog has almond-shaped, deep, slightly slanting eyes which are in shades of brown, medium in size and deep-set. Its neck is arched with a moderate dewlap and muscular.

The Tibetan Mastiff Dog is an even-tempered, calm, fearless, thoughtful and a courageous dog. It is loyal and affectionate to the owner and family. It can bark aggressively if kept outdoors. However, it tends to remain silent indoors. Tibetan Mastiff Dogs can be used as a flock- guarding dog as it is very ferocious against leopards, fox and other danger animals which pose a threat to its flock. It is friendly but can remain reserved around strangers.

The Tibetan Mastiff dog can be prone to thyroid problems, ear infections, hip dysplasia and skin conditions. Canine Inherited Demyelinative Neuropathy is usually a disease which is prone to puppies of the breed and can be fatal. The dog can live up to over fifteen years of age.

Search the Web for More information on Tibetan Mastiff Dog at LookSeek.com Search