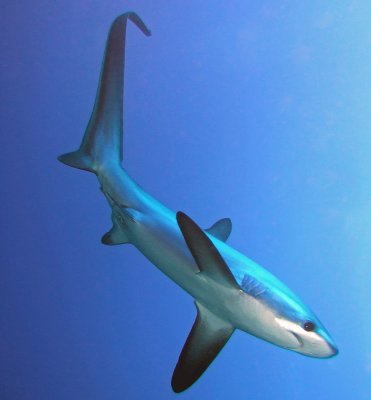 Facts about Thresher Sharks, "Scientific name for Thresher Shark is Alopias vulpinus". Thresher shark is a species of lamniform sharks in the Alopiidae family. The species was first identified by Bonnaterre in 1788. Thresher sharks are also called the sea fox or fox shark. The Vulpinus species name for the common thresher shark even comes from the Latin word for fox, “vulpes”.
The thresher shark is a type of mackerel shark. These amazing sharks that kill far more prey with their tails than their teeth. Thresher sharks kill by whipping their tales to stun prey or kill them. The Thresher Shark eat schooling fish like mackerel and herring and cephalopods like squid. The Thresher Shark live in the warm and temperate ocean.
Thresher sharks have a caudal fin or tail that is approximately half of their overall length. They come in a variety of colors from brown to black. The Thresher Shark have irregular white markings on their undersides. The white patch starts under the snout and stretches to the abdominal area.
Thresher sharks range from ten to sixteen feet (3 to 4.87 meters) long, with a few reaching twenty feet (6 meters) in length. The Thresher Shark have large eyes for their body size and smaller teeth and jaws.
Thresher sharks can leap out of the water. They more often slap the water with their tail to force schooling fish into tighter formation before whipping the group with the tail to stun or kill them.
Thresher sharks give birth to live young that hatch inside the mother. Between two and six live shark pups are delivered, but more may have been conceived and eaten by their developing siblings. The live Thresher Shark pups are up to five feet (1.52 meters) long at birth.
They live in shallower waters when young but adults are found at depths of over a thousand feet. The Thresher Shark are typically found near the continental shelf. However, they are highly migratory, so it is not known how often they reside in the deep ocean or travel through the ocean to reach other continents. The Thresher Shark range from the coast off Argentina to Newfoundland, the eastern coast of Australia to Indonesia to Japan and throughout the Mediterranean.
There are over 400 types of sharks, Sharks have the most powerful jaws on on earth. Thresher Sharks jaws, both the upper and lower jaws move. Thresher Sharks skin is made of denticles instead of scales like other fish. The denticles are constructed like hard, sharp teeth (tooth-like projection) and this helps to protect the Thresher Shark from being injury. The Thresher Shark is carnivores meaning: an animal that feeds on flesh (Meat).

Search the Web for More information on Thresher Shark at LookSeek.com Search