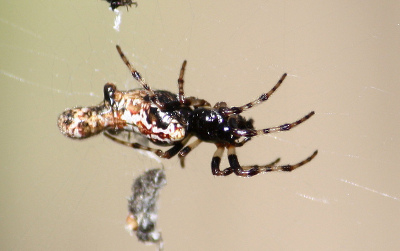 The Cyclosa spiders have a cylindrical abdomen which is easily recognized by a characteristic U-shaped demarcation which is between the raised head and its flat thoracic region.

The Three-lobed Spider has a well armed last pair of legs and with strong spines. It is usually around 6 mm in length, and they have a conical hump placed at the front of the abdomen. The female can reach up to 9 mm and 5 mm for the males.

Three-lobed Spiders enjoy decorating their vertical orb-webs with bands of rubbish that could be an insect that was bound in silk for later meals or it is a waste.

The Three-lobed Spider makes small circular orb web, and the center of their web has loops of coarse silk. The spider enjoys to time from the center of the web, and it can easily be mistaken for a dead flower or debris stuck on the web.

This is not an aggressive species and sometimes it is thought to be too small to cause any harm to humans.

The diet of Three-lobed Spider consists of mainly insects. The small insects get trapped on the web, and immediately it is engulfed with enough silk that it can not escape.

Three-lobed Spiders have oversize brains.
In the Three-lobed Spider the oxygen is bound to "hemocyanin" a copper-based protein that turns their blood blue, a molecule that contains copper rather than iron. Iron-based hemoglobin in red blood cells turns the blood red

The Three-lobed Spider like living in low shrubs. A mature female’s web reaches lengths close to half a meter in width, and they make egg-sac outside their web. Though most spiders prefer resting on their webs with head facing downwards, Three-lobed Spider can rest on its web with unsystematic orientations.

A Three-lobed Spiders stomach can only take liquids, so a spider needs to liquefy their food before they eat. They bite on their prey and empty its stomach liquids into the pray which turns it into a soup for them to drink.

Search the Web for More information on Three-lobed Spider at LookSeek.com Search