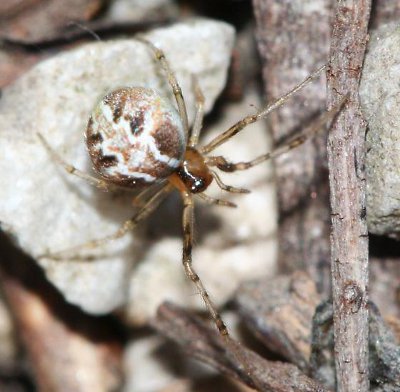 Facts about Theridiid Spider, Therdion Spider named after the Theridiidae family in which it belongs. This gene of spider consists of about 600 described species. And the Notable species is the Hawaiian happy face spider. It is categorized as a cobweb spider, and chances are that you can not miss to notice a cobweb spider in a corner somewhere in your house at this right moment. The Theridiid Spider are also commonly known as the comb-foot spiders.

The Therdion Spider has a row of bristles or setae on their legs. This bristles helps the spider to wrap its silk round the captured prey.

The Theridiid Spider are sexually dimorphic in size; the male Therdion Spider is quite smaller than their female counterparts. The female spiders have spherical abdomens and with long slender legs.

Therdion Spider behaves similarly to the Dew Drop Spiders. It builds a web which is used to trap small insects. They live in social community where the adult females share a web with the spider lings. They can also practice kleptoparasitism; the behavior of stealing food from another spiders’ webs.

They build an irregular, and 3 dimensional web of sticky silk. Some of the species are too small and are mild to have any life threatening situation on humans. They are not known to bite people.

They can also work as a team when pulling large prey back to the lair, and they do this in-turn this shows the high coordination that they have.

Therdion Spider feed on insects that often get trapped on their web. When a prey gets trapped on the spider’s web, immediately the spider will inject it with venom and then wrap it tightly in its silk. This way the meal can be consumed later.

Therdion Spider is quite common in relatively damp terrain, in the herbaceous and the bush layer. It also likes sharing webs with the large orb weavers.

Theridiid Spiders have oversize brains.
In the Theridiid Spider the oxygen is bound to "hemocyanin" a copper-based protein that turns their blood blue, a molecule that contains copper rather than iron. Iron-based hemoglobin in red blood cells turns the blood red

A Theridiid Spiders stomach can only take liquids, so a spider needs to liquefy their food before they eat. They bite on their prey and empty its stomach liquids into the pray which turns it into a soup for them to drink.

Spiders do not have a skeletons. They have a hard outer shell called an exoskeleton-(a rigid external covering for the body in some invertebrate animals). The exoskeleton is hard, so it can’t grow with the spider. The young Theridiid Spiders need to shed their exoskeleton. The spider has to climb out of the old shell through the cephalothorax. Once out, they must spread themselves out before the new exoskeleton will harden. Know they have some room to grow. They stop growing once they fill this shell.
Female Theridiid Spiders lay eggs on a bed of silk, which she creates right after mating. Once the female Theridiid Spider lays her eggs, she will than cover them with more silk.

Search the Web for More information on Theridiid Spider at LookSeek.com Search