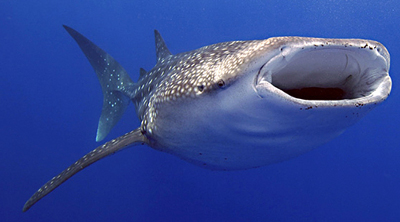 The Whale Shark species is grey in color with a white underbelly and is covered in a checkerboard of light yellow stripes and spots. Since these spots and stripes are unique to each individual, the Whale Shark can be used for identifying and research purposes. Whale Shark has a large flat head and the eyes sit towards the front of the mouth. The mouth can open up to approximately 5 feet (1.52 meters) and it consists 300-350 rows of tiny teeth.

While mating and pupping have never been witnessed, the female Whale Shark is considered to be ovoviviparous, carrying eggs inside and then giving birth to live pups.

Scottish military doctor Andrew Smith while working in South Africa first gave them the name in 1828.
While the population of the Whale Shark species is unknown, the International Conservation of Nature Union considers them vulnerable. The Whale Shark have been banned for fishing for commercial use in the Philippines, Taiwan, and India, but are known to still be hunted.

The Whale Shark are also quite docile and playful with divers and in some cases will allow swimmers to “hitch a ride”.
The Whale Shark can be found in all tropical and warm waters and have a lifespan of 70 years.

There are over 400 types of sharks, Sharks have the most powerful jaws on on earth. Whale Sharks jaws, both the upper and lower jaws move. Whale Sharks skin is made of denticles instead of scales like other fish. The denticles are constructed like hard, sharp teeth (tooth-like projection) and this helps to protect the Whale Shark from being injury. "Scientific name for Shark Selachimorpha"
"Fear of Sharks Selachophobia".

Search the Web for More information on Whale Shark at LookSeek.com Search