The Life of an Antlion from Larva to Adult 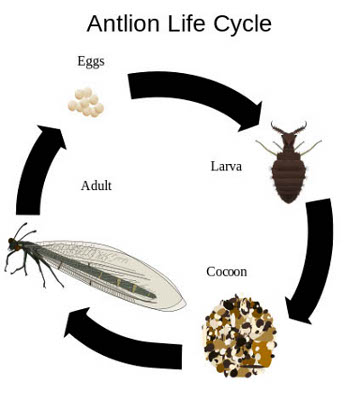 Facts about Life of an Antlion from Larva to Adult. Antlion, a family of insects of class Myrmeleontidae , though they look harmful, they are completely harmless to flowers, people or any structure. You can easily find these insects at the soft soil near the foundation of your home especially during summertime. If you observe keenly you can also notice funnel shaped small pits on the ground still near the foundation of the house where rain rarely reaches. It is in these funnel-shaped pits where immature antlions lie. But why are these insects referred to as antlion?

The name antlion perfectly suits this insect because of the predacious characteristic of its larva. The antlion’s larva is brown in colour and has an oversized head with spiny jaws. With its short legs and body covered in bristles, it crawls on the ground preying for ants. This therefore gives its name the antlion- a lion hunting for ants.

Unlike other insects, the larva of an antlion is adapted to constructing its own pit. The funnel- shaped pits that you usually see at the soft soil near your home are constructed by the larva or an antlion. And another amazing thing about these insects is that the larva looks completely different from the adult insect. They are also sometimes referred to as doodlebugs. This is a nickname they were given because to their special ability to locate a soft soil that is very suitable for the construction of their pits. When it matures it leaves a narrow, twisted furrow in the soft soil that looks like a doodling. Some species of antlion larvae hide under some debris or wood and then attack other passing insects. This is their option in places where there are few ants and soft soil is hardly available.

Hunting tactic of an antlion larva

After digging the pit, the antlion larva lies motionless in the pit with its mandible partial exposed. This is not only a place of maturing, but a trap for other insects. When ants or other insects crawl near the inverted conned-shaped pit, they slid inside and fall to the bottom. Then the antlion larva uses its mandible to impale and drags it deeper into the pit. In the deeper part of the pit, the antlion sucks the prey’s inner body fluids. After maturing and leaving the pit, other insects such as chalcid wasp, of similar species, takes charge of the pit and apply the same preying tactic.

Adult antlions resemble damselflies or dragonflies. They have long clubbed antennae and they are also characterized by different venation on their wings. These are the features that are used to different them from other insects that they resemble such as Odonata. Even after maturing, antlions continue preying on ants, which is the reason why you should never be scared when you see them near your home or garden.

The size of the adult antlion

While in their larva stage they are 1.5 cm (just the size of the nail), when they fully mature they more than triple their size. Adults grow to become approximately 4 cm (1.5 inches)long with their wing becoming as long as 8 cm (3 inches). Antlions are classified to the group of beneficial insects to human beings. This is because they feed on ants, a common pest to humans.

Search the Web for More information on The Life of an Antlion from Larva to Adult at LookSeek.com Search