The Great Boston Molasses Flood of 1919 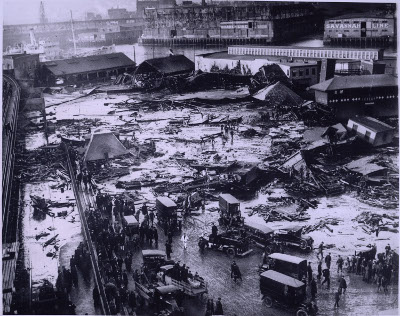 On January 15, 1919 at about 12:30 pm, a six-story-tall molasses tank at the United States Industrial Alcohol Company exploded sending 2.3 million gallons racing down Commercial Street at 35 miles per hour in the city of Boston. Several buildings were destroyed, including a fire station and the companiesâ€™ offices.

The gigantic wave of molasses flowed quickly down the surrounding area, and buildings were pushed off their foundations and overturning anything in its path. The streets promptly filled with the molasses in some places up to 3 feet deep.

The molasses in the 58 foot tall storage tank was awaiting to be moved to their processing plant, where it would be used for sweetener, making ethyl alcohol for alcohol and armaments.

While the exact cause of the explosion was never determined, but it is attributed to very warm temperatures and a defective tank.

About twenty-one people lost their lives in the disaster and 150 injuries were reported.

The company, in the end, paid out about $1 million in settlements, (about $12.4 million today).

In a article in the Boston Globe later that day stated:

Fragments of the great tank were thrown into the air, buildings in the neighborhood began to crumple up as though the underpinnings had been pulled away from under them, and scores of people in the various buildings were buried in the ruins, some dead and others badly injured.

The explosion came without the slightest warning. The workmen were at their noontime meal, some eating in the building or just outside, and many of the men in the Department of Public Works Buildings and stables, which are close by, and where many were injured badly, were away at lunch.

Once the low, rumbling sound was heard no one had a chance to escape. The buildings seemed to cringe up as though they were made of pasteboard.

Search the Web for More information on The Great Boston Molasses Flood of 1919 at LookSeek.com Search