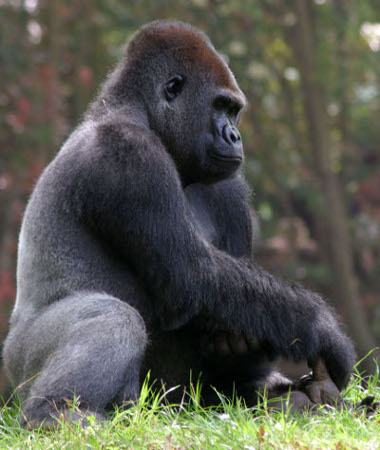 Facts about The Great Apes, Except for man, the great apes (or Hominidae)are the most advanced primates. About 20 million years ago man and the apes had a common ancestor, and apes therefore are our nearest living relative.

There are nine species of apes altogether. These include six species of gibbons, the orangutan, the gorilla and the chimpanzee. Gibbons are the smallest and the most agile apes. They have some characteristics of Old World monkeys and are classified in a group by themselves. The remaining three apes are known as the great apes.

Orangutans are found only in the forests of Borneo and Sumatra. They have many human like characteristics, and in Malaysian Orangutan means the old man of the woods. The fruit eating apes can move rapidly when necessary, but most of the time they climb lazily among the treetops. At night, an Orangutan makes a temporary nest of branches and twigs in a fork of a tree and covers it with a roof of large leaves to keep the rain off.

The face of the female Orangutan is naked but the male grows a bright orange moustache and beard. Both sexes have a pouch underneath the throat but the males are larger and he uses it to make loud fierce roaring noises.

Gorillas have unjustly earned a reputation for being savage monsters, but in fact they are gentle, shy animals that are more likely to move quietly away at the first sign of danger. When severely provoked, a Gorilla may show aggression by rearing up and beating it's chest. However, if the intruder stands still the Gorilla will usually not attack.

Gorillas are found only in Africa. There are usually two lowland populations and mountain population. However, despite slight differences between them, zoologists agree that they all belong to the same species. They live in troops, each led by a dominant male, who can be generally by recognized by its silver grey back. The rest of the troops consist of a few younger males, several females, and their young. Gorillas spend most of their time on the ground, eating leaves and fruits. At night, an adult Gorilla sleeps on a bed of leaves.

Chimpanzees are generally regarded as man's closest ape relatives. Their complex behavior has been studied extensively and they are certainly highly intelligent. Sometimes they use sticks and stones as tools or weapons. The mother grooms her young from an early age and adults spend time groom each other as a social activity. They learn quickly and are able to work out complicated problems. In the wild, they communicate with each other using a wide range of calls and signs.

Chimpanzees are found in equatorial Africa and they are highly social animals and live in large troops consisting of males and females of all ages. Within the troop, a hierarchy is understood and respected by all the members. Chimpanzees eat a variety of foods, including fruits and insects.

Search the Web for More information on The Great Apes at LookSeek.com Search