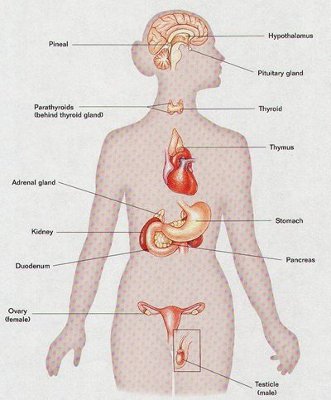 The pituitary gland is sometimes referred to as the master gland as it has the to deal with the greatest amount of hormone production and in some way deals with all physiologic processes. The pituitary gland has two parts the posterior and anterior pituitary. The hypothalamus is what comes before the pituitary sending releasing(Turn on) and inhibiting(Turn off) hormones. Specific hypothalamic hormones bind to receptors on specific anterior pituitary cells, modulating the release of the hormone they produce. For example thyroid-releasing hormones are sent from the hypothalamus to the anterior pituitary that then tell the thyroid gland to release hormones to do its job. "The thyroid plays an important role in regulating the body's metabolism and calcium balance. The T4 and T3 hormones stimulate every tissue in the body to produce proteins and increase the amount of oxygen used by cells".(University of Maryland Medical Center, Thyroid Gland | University of Maryland Medical Center http://umm.edu/programs/diabetes/health/endocrinology-health-guide/thyroid-gland#ixzz2jiG73Xm2)

These hormones that the endocrine secretes and controls help us live our lives and adapt to situations and stressors that are demanded on our bodies. The brain releases these hormones to change the way our brain works, how we behave and how our body reacts. Most of these hormones helped our ancestors hundreds of years ago to deal with difficult situations such as hunger. Feeding and hunger are controlled by the hypothalamus which encourages us to seek out food which can use hormones to allow us to eat even the most unappealing things. In a life or death situation these hormones are used to make our bodies extremely efficient. Survival with little to no food for prolonged periods of time would not be possible without these hormones. for example if the body is deprived of food for a long period of time hormones shut down non vital processes such as fingernail or hair growth and shuts down the production of new cells to increase our hunting and problem solving skills and to allow use to use as little energy as possible until the next meal.

Search the Web for More information on The Body Endocrine System at LookSeek.com Search