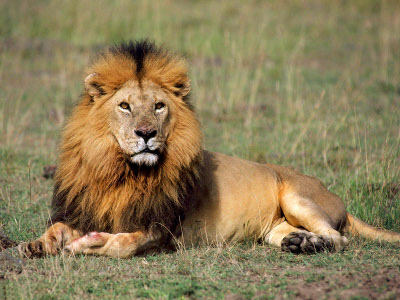 The group known as the big cats includes the Tiger, Leopard, Jaguar, Lion and Cheetah. Several factors distinguish these from smaller cats. Big cats can roar the pupils of their eyes are round and when purring they have to pause to breath. Smaller cats cannot roar their pupils are vertical slits and they can purr almost constantly.

At one time there were big cats in almost all the parts of the world. However, with the arrival of humans this reduced the areas in which they could hunt. More recently, they have been killed for their skins and some of them are in danger of extinction.

Most big cats are solitary animals except during mating season. They live and hunt alone, usually at night and one animal may require a large territory. A Tiger, the largest of the big cats, is thought to need 30 square miles to live and may range over 700 square miles. Today the eight races of Tiger are all in Asia. There they prey on large animals such as deer, wild boar, and even baby elephants.

Leopards are more widespread, they are found in Africa as well as Asia. They are excellent tree climbers and feed on a wide range of animals from rats to hedgehogs to gazelles and zebras.

The Jaguar is the only big cat to have reached the Americas, where it feeds on wild pigs and other small animals. The Jaguar is no longer found in North America and in South America, they are an endangered species.

Lions are unusual in that they are not solitary animals. The live together in a group called a pride. A typical pride may contain from six to thirty animals, which include one or two males and a number of females and their young. The males look after the pride driving away any young males that try to take over and they do not hunt. The lionesses who work together stalking and laying in wait do the hunting. There used to be Lions in Europe, but now they are only found in Africa and parts of India.

The Cheetah also hunts by day but unlike the other big cats, in cannot roar. It is also the only big cat that can retract its claws and it is the fastest land animal in the world, and can reach upwards of 70 mph. Cheetahs are found in Africa and Asia and they prey on small antelopes such as gazelles.

Search the Web for More information on The Big Cats at LookSeek.com Search