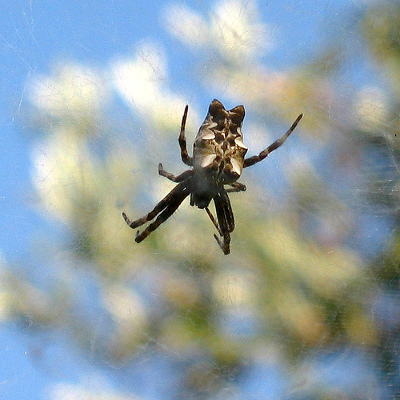 Facts about Tent-Web Spiders, "Scientific name for Tent-Web Spiders is Cyrtophora citricola". There are a variety of Tent-Web Spiders. The Tropical Tent-Web Spider is an araneid spider that commonly occurs in warmer parts of Africa, Asia, and Europe, but can also be found in Costa Rica, Colombia, Australia, and Hispaniola.

The Tent-Web Spiders belong to the family commonly known as Orb Web Spiders, though unlike the other members of this family, they do not build orb webs. Instead they build a horizontal web that forms a cone-like shape in the middle and with many we lines support. Tent-Web Spider web is not sticky, the spirals and radials are generally constructed from the same silk

Tent-Web Spider color vary greatly; though many have been spotted in sported black and white pattern, while others are brown, and males at times appear black. The Tent-Web Spider are 3mm when fully grown.

They also got the ability to change their body color rapidly.

Spiders belong to a group of animals called "arachnids", mites and Scorpions and a tick is also in the arachnid family. An Arachnids is a creature with eight legs, two body parts, no antennae or wings and are not able to chew on food. Spiders are not insects because insects have three main body parts and six legs and most insects have wings. The Arachnids are even in a larger group of animals called "arthropods" an invertebrate animal of the large phylum Arthropoda, which also include spiders, crustaceans and insects. They are the largest group in the animal world, about 80% of all animals come from this group. There are over a million different species. There are more than 40,000 different types of spiders in the world.

Tent-Web Spiders have oversize brains.
In the Tent-Web Spider the oxygen is bound to "hemocyanin" a copper-based protein that turns their blood blue, a molecule that contains copper rather than iron. Iron-based hemoglobin in red blood cells turns the blood red

Many Tent-Web Spiders females can build webs in close vicinity, and can live in a colony of even one hundred individuals. It is observed that the Tent-Web Spider can catch equal amount of prey with their smaller webs compared to other solitary specimens. The colonies are often made up of offspring of a single Tent-Web Spider female, which did not disperse after they hatched.

The male Tent-Web Spider adults don’t build webs and stops eating. They die soon after mating, though the females may live long enough to safeguard the young ones they some times die even before they hatch.

A Tent-Web Spiders stomach can only take liquids, so a Tent-Web Spider needs to liquefy their food before they eat. They bite on their prey and empty its stomach liquids into the pray which turns it into a soup for them to drink.

Tent-Web Spiders do not have a skeletons. They have a hard outer shell called an exoskeleton-(a rigid external covering for the body in some invertebrate animals). The exoskeleton is hard, so it can’t grow with the spider. The young Tent-Web Spiders need to shed their exoskeleton. The spider has to climb out of the old shell through the cephalothorax. Once out, they must spread themselves out before the new exoskeleton will harden. Know they have some room to grow. They stop growing once they fill this shell.

Search the Web for More information on Tent-Web Spiders at LookSeek.com Search