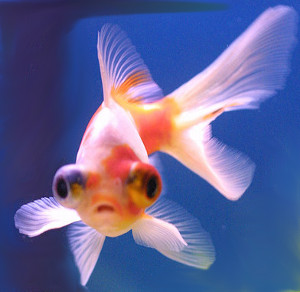 Facts about Telescope Eye Goldfish. Telescope Goldfish (syn: Carassius auratus gibelio). The Telescope Goldfish derives its name form its large and protruding eyes which was described by Bloch 1782. Other names are Globe-like-eye Goldfish, Dragon eye. Telescope Goldfish are easy to raise good for beginners. Their temperament is of that of a calm and Peaceful fish. Maximum Length: 8 to 10 inches. Minimum Aquarium: 20 Gallons, Water Conditions: 65-75 F, KH 4-20, pH 6.5-7.5. The diet is that of a Omnivore. Origin: Asia, Japan, China. Family: Cyprinidae, Life Span: about 7 to 12 years but can live longer. The Telescope Eye Goldfish has an egg-like-shaped body with large protruding eyes (buggy eyes) that looks like those of a dragon. The eyes are also dome-like-shaped and are wider at the base than the tip. Initially bred in China as an experiment, Telescope Eye Goldfish is now popular all over the world. The goldfish of today are descendants of a wild carp fish, known as the Prussian Carp, Silver Prussian carp, or Gibel Carp Carassius gibelio. They inhabit the slow moving and stagnant waters of rivers, ponds, lakes, coves, and ditches feeding on plants, small crustaceans, detritus, and insects. Goldfish were originally developed in China, but by the 1500's goldfish were traded to Japan, to Europe in the 1600's, and to America by the 1800's. The majority of the fancy goldfish were being developed by Oriental breeders and sold. The results of this centuries long breeding is the beautiful goldfish colors and forms that we see in the goldfish today. In America, all Telescopes tend to be referred to as "Moors", though technically that label only applies to Black telescopes gold fish.
The Telescope Eye Goldfish poor eyesight means they are very clumsy when it comes to detecting and avoiding danger.
They need an environment where they can't damage their eyes by bumping into stuff, so no sharp objects should be in their tank. The sacs of Bubble Eyes can grow back, but once a telescope's eye is punctured, its damaged for ever. So it is even more important that their environment not contain objects that could damage or puncture their eyes.
There is really no single standard when it comes to fin types for Telescope Eye Goldfish. They can have almost any type of fin seen on any other breed of goldfish. Butterfly tail, Veiltail, and Ribbontail varieties are also available.
Telescope Goldfish has normal eyes while inside of it's egg. One month after the gold fish being hatched, its eyes begins to grow the bulge. It may take three months to develop those protruding eyes. Another special feature is that these fish have a single dorsal fin while other fins are paired. The fins include a pair of deeply forked caudal fins, a long dorsal fin and a pair each of pectoral, anal and pelvic fins. The shape of the caudal fin can be broadtail, butterfly, or veiltail. the Telescope Goldfish is different from Celestial Goldfish by the eyes which are in upward direction. Some people find the big bulging eyes of the telescope mesmerizing, while others find it really ugly. However, Telescope Goldfish has unique eyes that will attract people to look at your fish.
The Telescope Eye goldfish comes in many different colors such as red, orange, white, white-and-red, calico, tri-colored, chocolate and blue. Another very beautiful, but rare color variation is that white-and-black, also known as the Panda-Telescope-Eye.

Search the Web for More information on Telescope Eye Goldfish at LookSeek.com Search