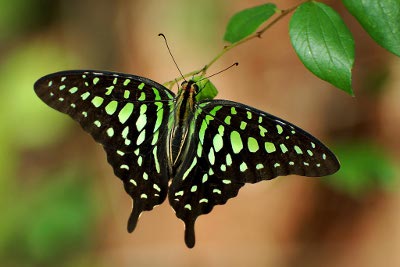 The Tailed Jay Butterfly is also called the green spotted triangle butterfly and the green triangle. It received this name for the many green spots on its black wings.

Tailed Jay Butterfly has a four to five inch wingspan (10 to 12.7 cm). It has long straight antennae. The Tailed Jay Butterfly has a black body with two vertical green stripes down its length. The underside of the wings is brown, with the same green pattern though the green dots are darker. The underside of the body is black. There are no major differences in size or coloring between male and female Tailed Jay Butterfly. Males are more likely to mud-puddle or “puddling”, the act of drinking water from holes in the wet ground or from mud puddles, in order to take in the minerals in the water.

When caterpillars become fully grown they will attach to an appropriate leaf or small branch, than they will shed the outside layer of their skin and a hard skin underneath known as a "chrysalis" will be their new look
An adult butterfly will come out from the "chrysalis" than it waits a few hours for its wings to dry and fill with blood, before it takes its first flight. The caterpillars live on a number of host plants: the soursop (Annona muricata), white champaca (Michelia alba), annona cherimla, the ashoka tree (Polyathia longifolia var. pendula) and several others. The larva are initially light brown or dark yellow before darkening to a dark brown. The Tailed Jay Butterfly have lateral spines on each of their three thoracic segments to deter predators from eating them as well as a pair of spines on their rears. Larva rest on the top of the leaf. The front of the larva grows darker and wider as it grows.
The Graphium Agamemnon builds a light green cocoon in which to pupate. It stays in the cocoon for twelve to fourteen days.

There are differences between the male and female Tailed Jay Butterfly. Females are similar in size but more likely to have a greenish white streak along both of their sides.

Tailed Jay butterflies are common and not considered endangered.

Search the Web for More information on Tailed Jay Butterfly at LookSeek.com Search