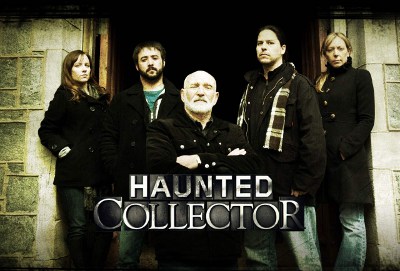 So I watched this show on SyFy called “Haunted Collector”, and all I can say is what a sham.

OK here is the simple premise.

John Zaffis, a paranormal expert, travels to people’s houses at their request to do a paranormal investigation and find an object that may be the cause of the activity. It's basically “Friday the 13th – The Series” made into a reality show.

First here is a little info about John Zaffis. He comes from a short lineage of paranormal experts. The kicker is he is the nephew of none other than Ed and Lorraine Warren. The Warrens are most well known for “The Amityville Horror” investigation and best-selling novel and movie of the 1970’s.

Well it turns out that that book was pure NON-FICTION.

The Warrens would go to someone’s’ house and say that the house was haunted or possessed, make up a scary story, and then they would retain the book, movie, and media rights. That’s how they made money.

Then there’s the book “In A Dark Place”, which became the movie “A Haunting In Connecticut”. I actually pitched this book, for a possible film in the 90’s. But there was one problem Ed Warren wanted a lot of money for his story, so that ended that. Someone else made the movie in 2009, but only after Ed had died, because lets face it, Lorraine needed the money.

Here is a quick quote by Ray Garton, the author


"I wrote IN A DARK PLACE: THE STORY OF A TRUE HAUNTING, in which a family had lived in a house that used to be a mortuary (allegedly...I never saw the inside of the house myself), which was, according to the Warrens, infested with demons. But the family involved, which was going through some serious problems like alcoholism and drug addiction, could *not* keep their story straight, and I became very frustrated; it's hard writing a non-fiction book when all the people involved are telling you different stories. So I went to Ed Warren and told him my problem. He told me not to worry, that the family was "crazy". I was shocked. He said, "All the people who come to us are crazy. You think *sane* people would come to us?" He knew I'd written a lot of horror novels prior to that, so he told me to just make the story up using whatever details I could incorporate into the book, and make it scary. Because I couldn't afford the attorney fees it would take to get out of the contract, I had to go through with the book, but I didn't like it. Since then, other writers who have worked with the Warrens have told me the EXACT SAME STORY, but they've done so quietly because they don't want to make any waves with publishers."

So they are old school snake oil salesmen, they tell you what you want to here and then you pay them for it.

Now back to my views on “Haunted Collector”. Just like I wrote above about the Warrens this is pretty much the same thing. You call and say my place is haunted, and they will come over and do an investigation and tell you some object is possessed and then they take it from you, problem solved right?

In the premiere episode the team finds a gun under a house in a box. This gun looks like someone made mud pies and wrapped the gun in it. Also all the chambers of the gun are literally packed with dirt, yet the box has loose dirt in it. This is what you see when they first open the box, it’s like the mud is only attracted to the gun.

So they take the gun with them.

Then there’s the old, yet very clean, haunted typewriter on the desk against the wall. The K2/EMF detectors are going wild when the go near this, so it must be possessed. There is a pretty cool antique stove they focus on at first, you can almost see John Zaffis drooling over it, like Pavlov’s dog. But obviously he can’t take that item.

So they take the typewriter with them.

I would have liked to see them go back and do an investigation after an object has been removed. This way they can prove that they were right, but that’s to easy, because they would just tell you they were. So I just think that John Zaffis is an antiques thief, building a big collection for his museum. Ed Warren also had an Occult Museum, so again you can see another pattern.

While I do believe that there are things out there we can’t explain. But also feel that this show is complete bullshit. I’m not even sure whether or not the items they collect are planted or not.

So give it a shot if you want, just remember what I said above and you’ll see what I am talking about. I might watch it again, just to watch a bunch really stupid people who think they are experts, make consistent mistakes.