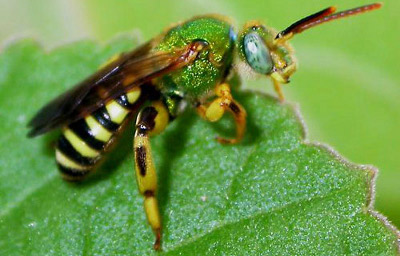 Facts about Sweat Bees, "Scientific name of Sweat Bee is Halictidae". Sweat Bees are in the family Halictidae, and order Hymenoptera. While the common eastern sweat bee of Dialictus zephrum genus. The alkali bee belongs to Nomia melanderi, and finally the parasitic bees are found in sphecodes genus.

Sweat bees are among a large family of bees that are attracted to the salt even from human perspiration. Sweat bees are generally small to medium-sized. They measure 3 to 10 mm in length. The Sweat Bees are mostly lack or metallic in color, while other varieties are brassy yellow or brilliant green. The male have a distinct yellow head and yellow marking on its back. Their hind legs are quite hairy which aide the bee in collecting big chunks of pollen. Sweat bees are common bees wherever, except in Australia where they are uncommon.

Sweat bees prefer warmer conditions and are often seen during the spring and the summer season, as the swarm searching for new nest. They are quite common in Canada and North America. The ground sweat bees dig tunnels, they prefer dry soil and they will always avoid damp areas.

Life Cycle, ehe Halictidae family is mostly eusocial and consists of a queen and workers, though their casts are not well-defined as the honey bees. Most of the species will nest in the ground while some will nest in the wood. Its nest consists of a main tunnel that may have one or more clumped cells, and in some species the bees continuously guard the entrances. Life cycle varies with species; unlike the honey bees, which will continuously feed the young until they are grown, the sweat bees ensure mass provisioning. Sweat bee will lay the egg in a waterproof cell that the workers fill with nectar and pollen, the cell is then sealed off. The larvae get its food at once. The pupae will eventually leave the cell in winter and then develop to an adult in the following year. It is also observed in some other species of the sweat bees, the female can nest communally; they share the nest entrance though they construct the cells individually.

The alkali bee is a ground nesting type of the sweat bee; it is somehow unusual bee that is native to the arid areas of the western United States. Typically, it prefers nesting in alkali soils.

There also is parasitic type of the sweat bees where the females like to invade nests of other bees in the same species and then lay eggs in the food accumulated by the original host of the nest.

The Sting of Sweat Bees

The sweat bees do not lie in large colonies and thus they are less defensive as compared to the wasps or honey bees. They will only act in defense when they are squeezed after they lay down on your skin. However the sting is painless and the affected area doesn’t get inflamed. Only the provoked female sweat bees sting.

The sweat bees are probably irritating as they try to get to your skin; they play a great role in pollination. They gather pollen to feed their young ones as they feed on nectar.
Sweat Beess carry pollen in them and it is called a pollen baskets. Pollen is the protein for which the baby bee needs to grow.
A Sweat Bees has two stomachs, the first stomach is for eating and the other stomach is specially designed for storing nectar collected from flowers and water, for making it possible to carry it back to the hive.

Search the Web for More information on Sweat Bee at LookSeek.com Search